Bipartisanship - Federalists and republicans in the early republic 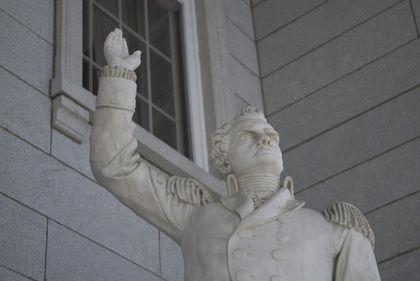 The American Revolution was itself a deliberate act of separation and self-isolation. In order to secure its independence from Great Britain, the newly created United States of America was forced in 1778 to ally itself with monarchical France. But that was indeed a marriage of convenience. The United States had no desire to trade its British masters for French ones. At its inception, the United States was a fifth-rate power of some economic but no military consequence. Its first president, George Washington, perceived that it was in his country's interest to avoid the power politics of Europe. The American Revolution served as a prelude to the French Revolution and a generation of war as first revolutionary and then Napoleonic France and its allies struggled with Britain and its allies for control of the Western world. Washington perceived that it behooved his infant republic to remain aloof from this great conflict. Not all agreed, and from this disagreement, in part, came America's first party system.

The Federalist Party emerged out of the bloc in Congress that supported Secretary of the Treasury Alexander Hamilton's financial program and the commercial and business interests that benefited from it. Ideologically, most Federalists were suspicious of the judgment and wisdom of the mass of citizens who in their opinion were prone to unchecked passions and social disorder; witness the activities of the mobs in the French Revolution. Federalists in general believed in a strong central government capable of acting decisively to maintain order and to restrain the popular tendency toward anarchy. To achieve such a government, they embraced Hamilton's "broad construction" of the Constitution. They detested the French Republic and agreed with Hamilton that the British system was "the best in the world." The opposition to the Federalist program developed under the leadership of James Madison, then a U.S. representative from Virginia, and Thomas Jefferson, who from 1790 to 1793 served as secretary of state in the Washington cabinet. The Republicans articulated the widespread fear among the people of a powerful, overbearing central government wedded to the particular interests of an economic elite that was little concerned with either the rights of states or the welfare of yeomen farmers and ordinary citizens. To preserve local and states' rights, and to protect individual liberty, they advocated the "strict construction" of the Constitution. Republicans accused Federalists of wanting to shape the American government to resemble the British monarchy. Republicans initially expressed admiration for the French and sought to portray the French Revolution as the natural playing out of the American Revolution.

In February 1793, France declared war on England, Spain, and the Netherlands, and in so doing set off a debate in the United States over what its policy should be if the government in Paris invoked the treaties of 1778. Hamilton argued that treaty obligations followed governments and because Louis XVI had been beheaded and the monarchy replaced by a republic, the United States was released from the terms of the treaty and free to declare neutrality as its national interest dictated. Jefferson countered that Louis had only been the agent of the sovereign nation of France and that that sovereignty remained intact. Nonetheless, he concluded, the United States should not come to France's aid if asked because it should not become involved in Europe's wars. Thus did the president proclaim and enforce neutrality with the support of both Federalist and Republican leaders. George Washington's Farewell Address, published in September 1796, was a paean to isolationism and nonpartisanship. Europe's interests, he declared, were different from those of the United States, and thus Americans should permit only "temporary alliances for extraordinary emergencies." The president also warned that party division "opens the door to foreign influence and corruption," because it meant that "the policy and the will of one country, are subjected to the policy and will of another."

John Adams defeated Thomas Jefferson for the presidency in 1796. Although himself a Federalist, Adams resisted the blandishments of Hamilton and other Anglophile members of his own party and refused to align the nation with Britain against France in the ongoing wars of the French Revolution. So angry were the extreme (High) Federalists that they conspired against Adams in the election of 1800 in an attempt to throw the contest to one of their own. As a result, Thomas Jefferson was elected, and the so-called Republican revolution was launched.

By the time Jefferson ascended to the presidency, the principal of neutrality had become the cornerstone of American foreign policy. As the Napoleonic wars unfolded, the Jefferson administration struggled to preserve its asserted right to trade with both sides. Anglophiles in the Federalist Party agitated for a tilt toward Britain, while Anglophobes in the Republican Party advocated a neutrality that, if not pro-French, was strict. Jefferson and his Republican colleagues looked forward to an America inhabited permanently by independent yeoman farmers. Land ownership, they asserted, was the primary guarantor of an independent electorate and thus of democracy. Consequently, when the opportunity to purchase from France the vast territory between the Mississippi River and the Rocky Mountains arose in 1803, Jefferson leaped at it. Federalists mobilized to fight the resulting treaty with France, insisting that it authorized too much money for land that the country did not need. They pointed out that nowhere in the Constitution was the president authorized to purchase real estate or convert the inhabitants of territories into citizens. These were but masks, however, for their concerns were that the new western states would ally with the South to further damage New England and the Federalist Party's position in the Union. Only John Quincy Adams, son of the former president and then a senator from Massachusetts, voted with the Republicans. But that was enough. The Louisiana Purchase Treaty was approved 24 to 7.

Great Britain's efforts to cut off trade with Napoleonic France and its allies led it to seize hundreds of American ships, and its unquenchable thirst for able-bodied seamen prompted it to impress American sailors. Although it worked assiduously to avoid the conflict then raging in Europe and on the oceans of the world, the Republican administration of James Madison, who had taken office in 1809, led the nation into war against Great Britain in 1812. While High Federalists proclaimed the conflict to be a Republican plot to align the nation with Napoleonic France, the decision to declare hostilities was bipartisan. Republican nationalists, angered by Britain's refusal to abandon the Northwest posts and to stop inciting American Indians against white settlers, joined with New England merchants and shipowners to push a declaration of war through Congress. When a plot by High Federalists to lead New England out of the Union was uncovered in 1814 and peace ensued with Great Britain later that year, the Federalist Party was effectively undone.

What ensued from 1816 to 1824 was a period in American politics known as the Era of Good Feelings. It was, in effect, a time of one-party Republican rule. In 1816, James Monroe defeated the Federalist presidential candidate by winning 183 of 217 possible electoral votes. He was elected four years later with only one symbolic electoral vote cast against him. Firmly committed to the view of a nonpartisan chief executive first articulated by President Washington, Monroe regularly condemned the "party spirit" as destructive to republican institutions. In an effort to create and sustain a national consensus, Monroe and Republican leaders touted a program that called for high tariffs to protect infant American industries, federal appropriations to fund internal improvements such as roads and canals, and ongoing efforts to solidify and extend the nation's burgeoning western empire. The ultimate manifestation and statement of Republican nationalism was the Monroe Doctrine.

In 1823 it appeared that in the wake of the Napoleonic wars, Spain, with the help of France's newly restored Bourbon monarchy, was preparing to resubjugate the republics of Latin America, which had taken advantage of Spain's involvement in the great European conflict to rebel and declare their independence. The Monroe administration, led by Secretary of State John Quincy Adams, was determined to prevent the restoration of Spanish power in the Americas. In the knowledge that whatever it did, the British Navy would prevent the departure of a Spanish-French armada for the New World, Monroe enunciated a doctrine that was simultaneously expansionist and isolationist. Posing as a defender of republicanism against monarchism, the United States declared that henceforward the Western Hemisphere was off limits to further European colonization. It posited the existence of two spheres, each with a separate set of interests, warned Europe to stay out of the affairs of the Americas, and promised not to interfere in European politics. Unspoken but generally recognized was that the United States did not include itself in the restrictions; indeed, the nation's generally agreed objectives were territorial and commercial expansion, and, ultimately, domination of the Western Hemisphere.