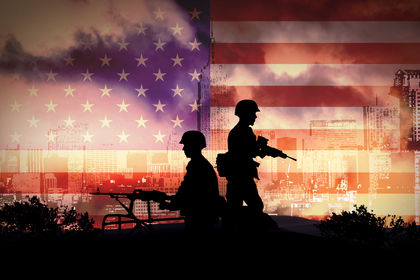 By the mid-1950s the Cold War had undergone a transformation. Stalin's death in March 1953 ushered in a period of transition for the Soviet Union, prompting the Kremlin's new leadership to stabilize its own power as well as Moscow's position with regard to the NATO alliance. Yet changes in the international arena would encourage those men, as well as their counterparts in the West, to view the developing world as a new site for East-West competition. President Dwight D. Eisenhower would engage the Soviets in that global battle for hearts and minds, a conflict that threatened to become particularly fierce in a region vital to U.S. national security: the Middle East. Eisenhower's January 1957 pledge to defend that region from "any country controlled by international communism" recalled his predecessor's commitment to "support free peoples" resisting foreign aggression. Eisenhower's willingness to commit American troops to that project went beyond what Truman had offered in March 1947; still, both statements were cut from the same cloth. Working from the premises of the Truman Doctrine while extending its range of policy options, Eisenhower added his name to a growing list of policymakers whose statements had risen to the level of American political doctrine.

Like the Monroe and Truman Doctrines, the Eisenhower Doctrine grew out of a specific set of historical circumstances. Since 1946 the United States had sought to counter Soviet encroachment in the Mediterranean and the Persian Gulf; its program of assistance to Greece and Turkey, as well as its rhetorical defense of Iran, served to keep those nations within the Western orbit.

Efforts to strengthen anticommunist forces in the region fell through, however, as Arab support for a Middle Eastern defense organization foundered over U.S. aid to Israel. Failure to erect a security structure for the Middle East in general—and for Western oil interests in particular—loomed large as the tide of anticolonialism grew in that part of the world.

Egyptian leader Gamal Abdel Nasser would rise to power on the force of anticolonialism, and the attraction of Nasser's equally potent message of pan-Arabism would pose further challenges to Western interests. The Eisenhower administration equated Nasser's radicalism and anti-imperialism with communism and hoped to contain the spread of those forces, a project of equal interest to Britain. In an effort to foster pro-Western sentiment, Britain tied itself to Iraq, Iran, Turkey, and Pakistan—each a nation bordering the Soviet Union—in a mutual defense organization known as the Baghdad Pact. Tensions in the region continued to ratchet upward as Nasser received arms from Czechoslovakia and, more dramatically, nationalized the Suez Canal in 1956. The ensuing crisis over Suez damaged British and French prestige, embarrassed the United States, and resulted in a propaganda windfall for Egypt and the Soviet Union. Political power in the region thus seemed to be swinging away from the West and toward the communist world.

Eisenhower attempted to reverse that trend in early 1957. Addressing a joint session of Congress on 5 January, the president outlined what came to be known as the Eisenhower Doctrine, a plan of action for combating communism in the Middle East. A resolution designed to implement the doctrine authorized the president to provide economic and military cooperation and assistance to "any nation or group of nations in the general area of the Middle East" fighting to maintain their independence. Money for that initiative, amounting to $200 million, would come from funds previously earmarked for the Military Security Act of 1954. Aside from providing economic aid, the resolution granted the president the option of using armed force "to assist any such nation or group of nations requesting assistance against armed aggression from any country controlled by international communism." After months of sometimes pointed debate—with lawmakers questioning both the imminence of communist aggression and the wisdom of granting the president a blank check for engaging U.S. forces—Congress passed the resolution, providing the commander in chief with the tools needed to carry out the nation's foreign policy.

The administration would invoke the Eisenhower Doctrine a number of times over the course of the following two years. A political crisis in Jordan, which involved King Hussein's ouster of pro-Soviet members from his cabinet in April 1957, provided the first opportunity for doing so. Claiming that Jordan's independence was vital to the United States, Eisenhower ordered the Sixth Fleet into the eastern Mediterranean. When stability returned to Jordanian politics, Eisenhower attributed that relative tranquility to the American show of force. The administration would deploy naval and air units to the region for a second time in 1957, as Syria's acquisition of Soviet arms generated concern for the future independence of Turkey and Lebanon. Once again the conflict receded, and once again Eisenhower ascribed that development to American resolve.

Tensions in the region remained high nevertheless, with Nasserism adding a potent ingredient to the East-West conflict. Lebanon would bear the brunt of that mix when an internal political struggle mushroomed into an international one. President Camille Chamoun initiated that conflict in 1958, when he tried to circumvent the Lebanese constitution and extend his hold on power. Fearing a loss of control, Chamoun appealed to the United States for support under the Eisenhower Doctrine, citing Syrian meddling in Lebanese affairs as a pretext for his request. For six weeks the United States did not oblige him. It was not until 14 July, when a coup in Iraq installed a Nasserite and pro-Soviet regime in Baghdad, that the administration acted. Responding to Chamoun's renewed calls for support, and coming on the heels of British aid to Jordan, the United States inserted fifteen thousand troops into Lebanon, the clearest application of the Eisenhower Doctrine to date.

Some have argued that Eisenhower's Eurocentrism and unfamiliarity with regional concerns blinded him to Middle Eastern realities, making him too willing to interpret the region's nationalist movements as hostile to U.S. interests. Much of this stemmed from Eisenhower's equating of Nasserism with communism. The president, in fact, attributed the Lebanese turbulence to the work of communist elements, a development that, he believed, threatened to engulf the entire region. His fear was that a single communist success might precipitate a domino-like chain reaction in which the governments of Lebanon, Jordan, and Saudi Arabia would each fall to the forces of Nasserism. Invoking the Munich analogy as well as the domino metaphor, Eisenhower declared Lebanon to be the victim of "indirect aggression from without," aggression that spelled trouble for pro-Western forces from Europe to Asia. His decision to send in the marines, therefore, stemmed largely from those broader concerns.

It is far from clear whether the destabilization of Lebanon would have resulted in the domino-like scenario Eisenhower envisioned. Nor is it clear whether anti-Western or pro-Soviet elements in the region would have been as hostile to America as Eisenhower imagined. Scholars have pointed to Iraqi general Karim Kassem as a case in point. Although Kassem would sign a defense treaty with Egypt and take his country out of the Baghdad Pact, Iraq emerged from the crisis as less ensconced in the Soviet camp than first believed. Neither of those measures—neither the arms deal nor the abrogation of the defense treaty—indicated complete subservience to the Kremlin. Moreover, while Kassem did increase his ties with Moscow, he also increased the flow of Iraqi oil to the West, hardly the response of an out-and-out Soviet lackey.

Historians have likewise questioned the wisdom of dispatching the U.S. Sixth Fleet to the eastern Mediterranean. While that show of force was supposed to deter Syria from meddling in Jordanian, Lebanese, and Iraqi politics, the move backfired, according to some historians, encouraging greater Arab unity in the face of Western intervention. Other scholars have claimed that the Eisenhower Doctrine sought to combat a threat that was largely imaginary. Nasser had no great affinity for the Soviet Union, and even less for Marxism. Rather, his anticolonialism was directed largely at Britain and France—not at the United States—leading Eisenhower to squander whatever good will he might have had with the Egyptian leader. Still others have cited Eisenhower's own actions as testaments to his doctrine's futility. Six months after the marines landed in Lebanon, they point out, the administration was reevaluating its entire approach to the Middle East, choosing to work with, and not against, Arab nationalism. By 1958 the Eisenhower administration was funneling over $150 million in aid to Egypt, hardly the result one would have expected prior to the doctrine's enunciation.