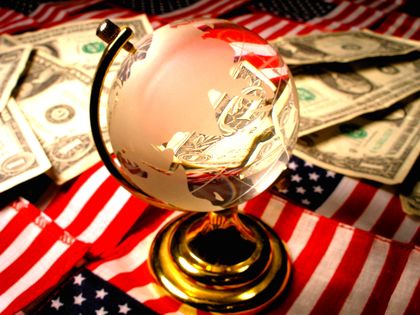 Attacks on globalization and its supporters in the foreign aid establishment, interestingly, resembled earlier excoriations of the imperialistic taint of foreign aid programs. In a 1987 study, Michael Hunt contended that "development was the younger sibling of containment" and "drew its inspiration from the old American vision of appropriate or legitimate processes of social change and an abiding sense of superiority over the dark-skinned peoples of the Third World." Writing in 1978, Ian J. Bickerton noted that "foreign aid has enabled former colonial powers, such as the United Kingdom and France, to maintain their historic political, economic, and cultural ties with former colonies … it is precisely this network of Atlantic-European domination and imperialism that forms the basis of the current aid programs." This assessment was echoed by the World Trade Organization protesters in Seattle, who accused the United States and other Western countries of perpetuating a mechanism of worldwide economic imperialism—née globalism. In the view of globalization's critics, this process is just another way for rich countries like the United States, with only a fraction of the world's population, area, and natural resources, to manipulate the global money market, to control much of the world's trade, and to reserve most of the world's raw materials for its own use.

In many ways, of course, foreign aid does continue the relationship that began under an earlier, imperialist past, particularly for colonial powers like Britain, France, and Belgium. Yet many other countries, such as the Scandinavian nations and Canada, who lack an imperialist history, have also become foreign aid donors, as Olav Stokke noted in a 1996 article. An overemphasis on the imperialism of foreign aid overlooks the importance of their "humane internationalism," which he termed "an acceptance of the principle that citizens of industrial nations have moral obligations" to the outside world.

Beyond the crimes of imperialism, foreign aid has also been vilified for aiding and abetting despotic regimes that have done little for their people. Scholars such as Hunt, Thomas G. Paterson, Richard H. Immerman and many others have criticized the United States's historic penchant for supporting right-wing military dictatorships in Latin America, Southeast Asia, and the Middle East in order to inhibit the forces of "international communism." Analysts like Nicholas Eberstadt, Doug Bandow, Peter Boone and others agree that aid keeps oppressive political elites in control, but they have focused their critiques more broadly on the overall ineffectiveness of this aid in meeting its stated aims. In several African countries, governments have been so corrupt and countries so wracked by civil war that foreign aid has served only to line the pockets of dictators. While such funds have certainly helped mitigate illiteracy and disease in much of the world, their record of lifting countries out of poverty is more mixed. Many countries have been aid recipients for as many as three decades, including Chile, Egypt, India, Sudan, Turkey, and the former Yugoslavia.

Besides being often ineffective, in some cases aid has been actually damaging. Relief worker Michael Maren, a veteran of the massive Operation Restore Hope campaign in Somalia during the early 1990s, recalled that "the relief program was probably killing as many people as it was saving, and the net result was that Somali soldiers were supplementing their income by selling food," even as rebel forces were using it to further their warfare on Ethiopia. In another ironic example, the U.S.-supported World Bank gave $16 million to Sudan to fight hunger while Sudan's government was starving its own people. Foreign aid, then, has been attacked by critics for imperialistically exploiting the Third World for Western interests, distorting economies, hurting local farmers and peasants, and consolidating the grip of local elites at the expense of the average Third World resident.

Nicholas Eberstadt argues that a chief reason for the inefficacy of U.S. aid is because it has not supported policies that are congruent with American values, including "the defense of liberty" and "the promotion of justice." Instead, the United States has too often relied on a "materialistic" policy limited to financial aid to oppressive regimes, overlooking the plight of those who continue to live under them. Yet Carol Lancaster, a former deputy administrator of USAID who readily admits the failure of aid in many African countries, contended in a 2000 article that foreign aid nevertheless has been "an extremely useful tool of U.S. diplomacy." She points to progress in lowering the rate of poverty worldwide, from 28 percent in the late 1980s to 24 percent a decade later, and to the trend of rising living standards in Europe, Asia, the Middle East, and Latin America. By the end of the twentieth century, these trends had yet to affect much of Africa. Further, she argues that a new policy of foreign aid, one that emphasizes humanitarian relief, democracy, human rights, and development—the latter to be limited to the poorest countries—is precisely the mechanism to further an American "diplomacy of values." Such aid will bring "soft power" to the United States, enhancing "the credibility and trust that the U.S. can command in the world."

This continued emphasis on values recalls the spirit of the 1985 Live Aid concert, orchestrated by rock star Bob Geldof in response to a devastating famine in Ethiopia. This and subsequent events helped create among their numerous participants a "constituency of compassion"— and a conviction that famine was a concern that the world community should respond to. At the time, however, critics dismissed this as so much sentimentalism and called for "development experts" to tackle the problem instead.

In the post–Cold War world both America's money and its position as the world's only superpower have made its global economic influence more significant than ever, especially in remaining areas of tension such as the Middle East and the former Yugoslavia. Peacemaking in such areas has emerged as perhaps the leading foreign policy problem facing the United States, and foreign aid remains the vehicle for most of the money that goes to these areas. In the Balkans, for instance, a promise of $500 million in U.S. aid helped end the war in Bosnia. The Israeli-Arab conflict has proved more intractable, though this seems unlikely to stem the flow of U.S. aid. Of the $3.5 billion in Foreign Military Financing (FMF) grants proposed in the 2001 budget to buy defense products and services, Israel was to receive just under $2 billion and Egypt $1.3 billion. In addition to this military aid, the State Department's Economic Support Fund also listed a $2.3 billion allocation for Israel and Egypt, with $840 million for the former and $695 million for the latter. Despite such hefty grants, Israel requested several billions more for advanced weapons systems not covered by the requested amounts.

Some critics have questioned how consistent these expenditures are with American values or with U.S. interests. As the Center for Defense Information's Rachel Stohl writes, "Selling weapons to these countries can perpetuate autocratic rule…. United States programs should not contribute to the prolonging of these 'un-American' practices." Leon Hadar of the CATO Institute, moreover, argues that the United States should drop its heavy commitment to Middle East peacekeeping, making room for regional powers such as Egypt, Jordan, and Saudi Arabia to get involved instead.

In addition to providing aid to Israel and Egypt, the FMF funds have been used for detonating mines, fighting narcotics traffic, helping to dismantle nuclear weapons in Russia, and integrating Hungary, Poland, and the Czech Republic within NATO. FMF aid, indeed, was part of a sizable U.S. foreign military assistance program that amounted to $17.4 billion in 2000, including both State and Defense Department programs. The International Military Education and Training Program (IMET), for instance, provided military training in the United States for personnel from thirty countries. While the Pentagon asserted that the $50 million program inculcated its students with American values and human rights principles, one of its member institutions, the School of the Americas in Fort Benning, Georgia, came under attack beginning in the 1980s for its connection with military adventurism in Latin America. Nineteen of the twenty-six members of the El Salvadoran military implicated in the murder of six Jesuit priests in that country in 1989 were alumni of Fort Benning. Adverse attention led the school to change its name in late 1999 to the Center for Inter-American Security Cooperation.

Far larger than IMET is the Pentagon's Foreign Military Sales Program, which racked up $12.1 billion in government-subsidized sales abroad in 2000 on such items as the M1A2 tank and the F-16 aircraft. A similar but much smaller effort is the Excess Defense Articles program, which exports military surplus through sales or grants to such countries as Israel, Egypt, Turkey, Poland, and Greece. Under the Foreign Assistance Act, the U.S. president also has "drawdown authority" to use defense monies for foreign emergencies as he sees fit. In 2000, President Bill Clinton put $80 million toward such causes as peacekeeping in Sierra Leone and a program to promote democracy in Iraq.

Thats a scholarly piece of work and a must read for every Development Studies student. My question however are, (1)What are controversies of foreign aid? and (2) What are the problems with globalisation? Thank you.