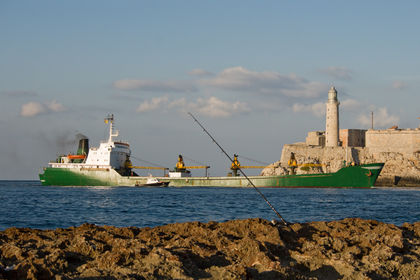 The postwar commitment of the United States to foreign aid stemmed from its vast aid role in World War II but also involved a number of new considerations. Initially, American foreign aid programs in the early Cold War demonstrated the nation's assumption of the economic and political role previously played by Great Britain, as exemplified by the Truman Doctrine and its support to such former British clients as Greece and Turkey. The United States also used foreign aid to promote free-market standards for development, including the integration of West European economies and the curtailing of economic protectionism, through such instruments as the Marshall Plan. These programs, and especially the Marshall Plan, would greatly benefit the U.S. economy by generating orders at home. Finally, and most importantly, these efforts were designed to prevent the spread of international communism. By early 1946, U.S. policymakers were becoming increasingly convinced that the Soviet Union had embarked upon a path toward world domination. The following year, the State Department official George F. Kennan called for "longterm, patient but firm and vigilant containment of Russian expansive tendencies," and the United States adopted containment as its doctrine for dealing with the Soviet Union.

It was Soviet pressure in the Mediterranean that led the United States to announce the Truman Doctrine in March 1947, thereby launching its Cold War foreign aid program in earnest. Extending an unprecedented peacetime aid amount of $650 million, the doctrine proclaimed that "it must be the policy of the U.S. to support free peoples who are resisting attempted subjugation by armed minorities or by outside pressures." It was the first time that the United States had put cold cash as well as warm bodies, in the form of technical advisers, behind the containment policy. In a joint session of Congress, Truman declared that totalitarian regimes "spread and grow in the evil soil of poverty and strife," and thus, U.S. help—the only help available, he declared—was necessary to stop the spread of communism.

Less than three months later, the United States proposed the Marshall Plan, or European Recovery Program, in response to the postwar economic crisis in western Europe that many U.S. officials felt would only make it easier for communist parties to take hold there. Secretary of State George C. Marshall, outlining the aid plan in an address at Harvard University on 5 June 1947, stated that the United States "should do whatever it is able to do to assist in the return of normal economic health to the world, without which there can be no political stability and no assured peace." If not for American aid, the Truman administration contended, no parliamentary regime in western Europe would survive and U.S. security would therefore be threatened. The Marshall Plan provided a $12 billion package to sixteen countries in western Europe that not only rebuilt the economies of its recipients but also instituted liberal economic practices such as lower tariffs and instruments to coordinate economic policies.

U.S. officials envisioned that foreign aid, by establishing beneficiaries' internal political stability, promoting their general economic development, and building military strength, was the best way to counteract Soviet expansion. As the program grew during the Cold War, aid recipients fell into two categories: forward defense countries bordering the communist bloc as well as those located in other strategic areas like South Asia and the Middle East, and the less strategically placed countries. In the forward defense countries, but also in sensitive areas like Latin America, aid was often designed to support existing, pro-American governments, through arms and personnel as well as through economic aid to mitigate internal discontent. It was hoped that aid would prevent these countries from falling into the Soviet orbit, which as a result often put the United States on the side of reactionary domestic forces, as was the case in Vietnam, Iran, and Cuba.

Economic assistance programs faced resistance in a tight-fisted Republican postwar Congress, but Cold War threats helped squelch such recalcitrance. Foreign aid quickly expanded to include the economic stabilization of non-European areas, as well as a new emphasis on military assistance. For example, the United States gave limited aid to such nations as South Korea, the Philippines, and Iran. Its biggest expenditure outside of Europe was the $2.5 billion in military and economic aid to the Nationalists in China, aid that continued even after Chiang Kai-shek's government had proved itself utterly beyond help. Then, at his inauguration in January 1949, Truman put forward a pioneering foreign aid proposal that included (1) support for the United Nations; (2) U.S. programs for world economic recovery; (3) support for "freedom-loving countries against aggression"; and 4) "a bold new program for making the benefits of our scientific advances and industrial progress available for the improvement and growth of undeveloped areas." In the wake of China's "fall" to communism, and the Soviet atomic blast, the military threat of Soviet expansion appeared grave, and Truman's third point, to assist "freedom-loving countries," was quickly put into effect. In October 1949, two months after the United States had officially joined NATO, the Truman administration created a Military Assistance Program under the auspices of the Mutual Defense Assistance Act, with a budget of $1.3 billion. Expenditures continued to rise, and in its first three years, as Chester Pach has noted, the program extended $8 billion in military aid to western Europe, largely with the aim of enhancing "the psychological attitudes and morale of our allies." Despite controversies that have dogged military assistance ever since—for instance, that it was an unwieldy program with "no organized, careful thought about what it was that we were trying to do," as Secretary of State Dean Acheson aptly put it—the program continued to grow. U.S. officials reckoned that if military aid were not continued in ever larger amounts, demoralization would set in, weakening western Europe's military position still further.

Point Four, which the inaugural address is best remembered for, was the basis for the Agency for International Development (AID), a $35 million program that provided technical assistance to the Third World. The Point Four program, according to a State Department official, sought "to strengthen and generalize peace … by counteracting the economic conditions that predispose to social and political instability and to war." Europe, now recovering with Marshall Plan aid, would no longer be the major recipient of American economic assistance. Despite Europe's continuing importance, as Acheson told Congress in 1950, "economic development of underdeveloped areas" had become a national concern, since "our military and economic security is vitally dependent on the economic security of other peoples." The process of decolonization had made these countries a key battleground in the Cold War, with both Russia and America vying for influence over the newly formed nation-states of Asia and Africa. (Another undeveloped area, Latin America, received less attention in the 1950s.) The UN and the World Bank also shifted their focus from reconstruction of war-torn Europe to the problems of the Third World at this time. The Third World's stash of raw materials further heightened its importance. In 1952 the President's Materials Policy Commission recommended that the United States look to the countries of Africa, the Middle East, southern and southeastern Asia, and Latin America for imports of minerals and tied aid programs to this end in the 1950s.

Truman's initiatives were incorporated into the Mutual Security Act (MSA) of 1951, which succeeded the Marshall Plan and offered a new program of economic and, especially, military aid both for Europe and the developing world. In its first year, for example, the act extended to Europe a combined military and economic package of $1.02 billion; in 1952, as the Korean War ground on, it included $202 million in military support to Formosa (Taiwan) and Indochina. In the wake of National Security Council document NSC 68 of 1950, which had called for large-scale military aid along with an enormous defense buildup, security-related assistance would become a hallmark of the Eisenhower era (1953–1961). Thus, while military assistance had been a little more than a third of the $28 billion in aid that the United States had extended during the Marshall Plan era (1949–1952), during the succeeding eight years, it was almost 50 percent of a larger, $43 billion total. Meanwhile, technical assistance under Point Four went to such countries as Liberia, Ethiopia, Eritrea (where the United States had a large surveillance post), Libya, Egypt, Saudi Arabia, Lebanon, Iraq, Israel, and Iran. Latin America was largely left out of Point Four until the end of the 1950s, although certain countries in which the United States countered perceived communist threats received significant security assistance.

Thanks for this article.

This article outlines the exodus of the American AID and its quest to maintain World Peace and Democracy, very commendable! However my question is, why do we still have the third world countries in poverty considering the time AID began? Why are for instance African Nations still where they are? It would be great to if the writer had also explored the subject of American turning AID for technical assistance to Africa, and its interest in the Raw Materials from these countries.