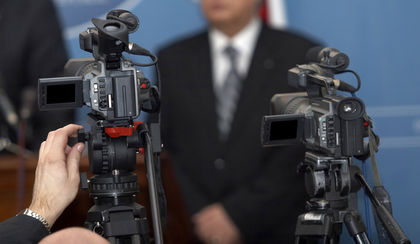 The Cold War inaugurated a paradigm shift in the U.S. practice of diplomacy that reflected changes in the nature of diplomatic activity worldwide. Through propaganda, policy initiatives, and covert action, agents of the U.S. government acted directly to influence the ideas, values, beliefs, opinions, actions, politics, and culture of other countries. Foreign affairs personnel not only observed and reported, they also participated in events or tried to influence the way that they happened. The old maxim that one government does not interfere in the internal affairs of another had been swept aside.

The pattern of international relations was further transformed by the electronic communications revolution and the emergence of popular opinion as a significant force in foreign affairs. Foreign policy could no longer be pursued as it had during the nineteenth century, when diplomacy was the exclusive province of professional diplomats who used (often secret) negotiations to reach accords based on power and interest. Developments in mass communication and the increased attentiveness to domestic audiences abroad to foreign affairs meant that the target of diplomacy had now widened to include popular opinion as much, if not more so, than traditional diplomatic activities.

A report published by the House Foreign Relations Committee in 1964, entitled "Winning the Cold War: The U.S. Ideological Offensive," captured this sentiment well:

For many years military and economic power, used separately, or in conjunction, have served as the pillars of diplomacy. They still serve that function but the recent increase in influence of the masses of the people over government, together with greater awareness on the part of the leaders of the aspirations of people…has created a new dimension of foreign policy operations. Certain foreign policy objectives can be pursued by dealing directly with the people of foreign countries, rather than with their governments. Through the use of modern instruments and techniques of communications it is possible today to reach large or influential segments of national populations—to inform them, to influence their attitudes, and at times perhaps even to motivate them to a particular course of action. These groups, in turn, are capable of exerting noticeable, even decisive, pressures on their government.

In other words, by appealing over the heads of governments directly to public opinion, effective propaganda and other measures would encourage popular opinion to support U.S. policies, which would in turn exert pressure on government policymakers.

Throughout the Cold War, propaganda and diplomacy operated on multiple levels. At the most obvious level, propaganda as it is conventionally understood (the utilization of communication techniques to influence beliefs and actions) was employed as a distinct instrument of U.S. foreign policy. Through the United States Information Agency, Central Intelligence Agency, and other mechanisms, the United States waged a war of words and of ideas that attacked communism, promoted capitalism and democracy, defended U.S. foreign policies, and advertised the American way of life in order to win the Cold War.

On another level, the awareness that international public opinion had become a major factor in the conduct of diplomacy meant that propaganda considerations intruded on the policymaking process itself. American policymakers were increasingly aware that international public opinion had to be an ingredient in policy formulation at all levels: in the planning and policy formulation stage, in the coordination and timing of operations, and finally in the last phase of explanation and interpretation by government officials and information programs.

This attitude played itself out most visibly in the United Nations, which became one of the most important arenas for Cold War propaganda. It also was reflected in the marked increase in the foreign travel of U.S. presidents and vice presidents, an important device for generating news coverage and for reaching international audiences directly. On a more routine basis, consideration of international public opinion simply involved the careful selection of words and phrases to describe the objectives of American foreign policy—including the process of creating what came to be known as a "sound bite."

Even within the State Department—an institution wedded to traditional diplomacy and wary of popular opinion—the Policy Planning Staff began to argue in the mid-1950s that convincing foreign officials was often less important than carrying issues over their heads to public opinion, reasoning that popular opinion would exert more of an impact on government officials than vice versa. The extensive and instantaneous media coverage that accompanied diplomatic conferences meant that negotiations needed to be conducted on two levels: on the diplomatic level between governments, and on the popular level to win international public support for policies. Diplomatic conferences were no longer merely opportunities for resolving international disputes; they were sounding boards for public opinion and forums for propaganda. Arms control proposals in particular were not infrequently tabled predominantly to satisfy the demands of public opinion for progress in disarmament. President Eisenhower's Atoms for Peace and Open Skies initiatives, for example, were sophisticated propaganda exercises designed to put the Soviet Union on the defensive and establish the U.S. commitment to peace and disarmament without making costly concessions or entering into protracted negotiations.

The psychological dimension of postwar American diplomacy also included a preoccupation with American prestige and credibility—concepts that connoted the reliability of American commitments and served as code words for America's image and reputation. As Robert McMahon has argued, throughout the postwar period American leaders invoked the principle of credibility to explain and justify a wide range of diplomatic and military decisions. American actions in such disparate crises as Korea (1950–1953), Taiwan Strait (Quemoy-Matsu) (1954–1955), Lebanon (1958), and Vietnam (1954–1973) were driven by a perceived need to demonstrate the resolve, will, and, determination—in a word, credibility—of the United States. In these and other cases, American actions were driven as much if not more by calculations of how the U.S. would be perceived abroad than by narrowly focused calculations of national interest.

Concerns about the maintenance of American prestige and credibility were undoubtedly magnified by the presence of nuclear weapons. The high stakes of all-out war in an age of nuclear devastation meant that the United States and Soviet Union channeled the competition into symbolic modes of combat. Nothing better illustrates this than the space race, which became the preeminent propaganda contest of the Cold War. Spectacular feats in outer-space exploration were at once symbolic of the scientific, technological, economic, educational, and military achievements of the superpowers. The space race also allowed the United States and the Soviet Union to demonstrate their military prowess—and thus reinforce the credibility of their deterrent capabilities—without appearing warlike. The successful Soviet launch of Sputnik I in 1957 and the American moon landing in 1969 were two of the most significant events of the Cold War, largely because of what they symbolized to people around the world.

The infusion of psychological considerations and propaganda tactics into the practice of diplomacy is one of the Cold War's most important legacies, but given the revolution in communication technologies of the late twentieth century it was perhaps inevitable that the ancient art of diplomacy would become affected by the techniques of propaganda and public persuasion. Despite the collapse of the Soviet Union and the end of the Cold War's propaganda battles, foreign policy continued to be swayed by images transmitted instantly around the globe.

The days of brazenly propagandistic posters and radio broadcasts may have faded into history, but the science of propaganda has simply evolved into less overt forms of image making and media manipulation. Paralleling a broader development in international politics, where symbols and images loom large as critical components of political power, the phenomenon of posturing for public opinion has become increasingly sophisticated, involving such techniques as staged media events, generated news, orchestrated public appearances, and carefully scripted sound bites. The communication techniques that camouflage modern propaganda have obscured the basic fact that the end of the Cold War has brought about more propaganda, not less.