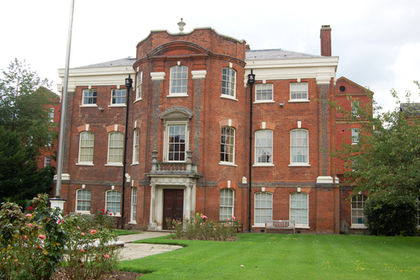 Not surprisingly, the French Revolution, and the subsequent war between revolutionary France and England after 1792, kindled the burgeoning rivalry between Jefferson and Hamilton, members of President George Washington's cabinet as, respectively, secretary of state and secretary of the Treasury. Earlier, such idealists as Paine and Jefferson had abhorred power politics and war; Hamilton, the realist, had preached preparedness with its warlike implications. The idealism generated by the French Revolution compelled a reversal of positions. Paine, supported by Jefferson, roused public clamors for support of the French Revolution and its principles. Idealists demanded that the United States support France's war effort. Hamilton, with Washington, inclined to peaceful neutrality, with the effect, if not the intention, of serving the British cause. The idealists argued from principle, the realists from prudence and experience. Hamilton's view prevailed when Washington issued his Neutrality Proclamation of 1793.

In Jefferson's subsequent debate with Hamilton over the wisdom and morality of Washington's proclamation, he based his advocacy of U.S. support for revolutionary France on the grounds that the United States must be faithful to its obligations under the Franco-American alliance of 1778, demonstrate gratitude for French assistance during the war against Britain, and reveal its affinity for republican institutions in a monarchical world. Jefferson's three arguments rested on sentiment, not interests. Hamilton attacked these propositions head-on in a series of long public letters. In "Pacificus" of 6 July 1793, he argued that a country's first obligation was to itself. The United States, he noted, had no power to aid France in its European war. No country, he concluded, could be obligated to do what it could not do. Next, Hamilton attacked Jefferson's notion of gratitude to France for past favors, noting simply that France had aided the United States to serve its own interests in England's defeat, not those of the United States. Governments, he argued, could not operate as individuals. Individuals could engage in actions of generosity or benevolence at the expense of their own interests, but a government, he said, could rarely be justified in pursuing such a course. It was responsible for the welfare of all of its citizens and for all time. In his "Americanus" papers of 1794, Hamilton denied, thirdly, that the cause of revolutionary France, with all of its excesses, was the cause of liberty, or that the failure of French revolutionary principles would undermine the security of the United States.

Hamilton read the nation another series of lectures on the fundamentals of a realist foreign policy in his "Camillus" essays of 1795. He published these papers in defense of Jay's Treaty, negotiated with Britain and signed in November 1794. Hamilton made little effort to defend the treaty's specific provisions or omissions, but lauded the settlement's role in preventing war. In no way, he declared, were the negotiations dishonorable, the terms disgraceful. He counseled moderation: "Nations ought to calculate as well as individuals, to compare evils, and to prefer the lesser to the greater; to act otherwise, is to act unreasonably; those who advocate it are imposters and madmen." Hamilton admonished Americans to recall that the United States, no less than the powers of Europe, were bound by the established modes of international behavior. "In national controversies," Hamilton averred, "it is of real importance to conciliate the good opinion of mankind, and it is even useful to preserve or gain that of our enemy. The latter facilitates accommodation and peace—the former attracts good offices, friendly interventions, sometimes direct support, from others." Against such appeals to tradition and common sense, Jefferson stood helpless. He confessed to Madison that Hamilton was "really a colossus…. In truth, when he comes forward, there is no one but yourself who can meet him." "For God's sake," he pleaded, "take up your pen, and give a fundamental reply to…Camillus." Madison declined the challenge.

Washington's Farewell Address of 17 September 1796 was the culminating statement of Federalist thought on matters of external policy. It reflected the views of Madison, Hamilton, and John Jay, the three authors of The Federalist. Hamilton, in revising it, made it largely his own. Washington's valedictory was a message for the times, but it was far more. He admonished the country to behave in accordance with established eighteenth-century principles as they applied to international affairs. Throughout his second term, Washington had been troubled by the dangerous attachments of too many Americans to the European belligerents. In October 1795 he had stressed the necessity of greater independence in a letter to Patrick Henry: "My ardent desire is…to see that [the United States] may be independent of all, and under the influence of none. In a word, I want an American character, that the powers of Europe may be convinced we act for ourselves and not for others. " In his Farewell Address, Washington explained why foreign attachments endangered the country's well-being: "The Nation, which indulges toward another an habitual hatred, or an habitual fondness, is in some degree a slave. It is a slave to its animosity or its affection, either of which is sufficient to lead it astray from its duty and its interest." Sympathy for favored countries or governments, he warned, assumed common interests that seldom existed and enmeshed a people in the enmities of others without justification. For Washington, there was no room in the country's external relations for crusades against evil.

Hamilton's voluminous writings during Washington's two administrations comprised a single, massive plea that the United States weigh its interests carefully before venturing abroad. Still, the persistent upheavals on the European continent, and their extension onto the Atlantic, touched American interests and sentiments sufficiently to keep alive the tensions between realists and idealists as they sought to influence national reactions to events abroad. The Napoleonic wars, especially as they ventured onto the Atlantic in one gigantic commercial conflict between the British navy and Napoleon's continental system, challenged the profits of America's neutral trade with Europe's belligerents. President Jefferson demanded both British and French recognition of American neutral rights and responded to his failure to obtain either with his embargo on American trade in late 1807. Under President Madison, after 1809 the country's frustration and animosity began to center on Britain because its infringements on the principle of freedom of the seas were more apparent than those of France.

As anti-British sentiment pushed the country toward war, it separated idealist sentiment, which focused on British immorality and the need to defend the principle of neutral trade, from realist arguments that war with Britain would be needless and futile. What those known as the War Hawks in Congress required was a rationale that would justify a declaration of war; the Republican Party, generally cohesive, would readily fall into line. That rationale lay in the supposition that Britain sought less the defense of belligerent rights than the ruination of the United States itself. Henry Clay of Kentucky claimed proof that Britain "will do everything to destroy us." Peter B. Porter of New York added that if the United States continued to submit to British indignities, it "might safely calculate to be kicked and cuffed for the whole of the remainder of [its] life." For some War Hawks, Britain desired no less than the recolonization of America. John A. Harper of New Hampshire charged that British conduct "bespeaks a determination to rule us, and can only be answered by the appeal to the God of Battles." Similarly, John C. Calhoun of South Carolina warned Congress that Britain was determined to reduce the United States to a colonial status.

Realists in Congress contested the march toward war. John Randolph, Virginia's noted conservative, questioned the assumption that American honor and security required a British-American conflict. In December 1811, he reminded Congress that the United States had no interest in contributing to Napoleon's success. Why, he wondered, should the country regard Britain as its special enemy? Every consideration of blood, language, religion, and interest, he observed, should incline the American people toward England. Randolph reminded Congress that the United States had no power to defeat England in war. Similarly, John Quincy Adams, U.S. minister in St. Petersburg, recalled from the Gospel of Saint Luke (14:31): "Or what king, going to make war against another king, sitteth not down first, and consulteth whether he be able with ten thousand to meet him that cometh against him with twenty thousand." The conditions confronting the United States, Adams reminded his wife, Abigail, on 1 January 1812, were even less favorable than that. When Congress, without preparation, declared war on 19 June 1812, Obadiah German of New York condemned the action. "After the war is once commenced…," he warned, "I presume gentlemen will find something more forcible than empty war speeches will be necessary." It was his purpose, said German, "to check the precipitate step of plunging [the] country prematurely into a war, without any of the means of making the war terrible to the enemy; and with the certainty that it will be terrible to ourselves." Having declared war, the country would have peace only with the enemy's consent.