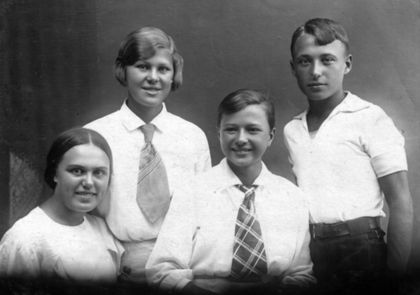 This repeated willingness of the United States to permit its burgeoning obligations, especially in the Pacific, to be driven by moral considerations culminated in Woodrow Wilson's crusade in Europe. The outbreak of war in the summer of 1914 thoroughly conjoined the realist and idealist elements in U.S. foreign policy. While realists and idealists differed in their judgments of the causes and meaning of the war, they agreed on the necessity of the struggle. Theodore Roosevelt, like other realists, feared that a German victory would endanger U.S. interests by undermining the historic European balance of power—a balance that had provided the United States almost perfect security through much of its history. Wilson, however, quickly turned the war into another moral crusade. For him, the breakdown of the peace revealed serious flaws in the international system that required correction. Determined to exert a powerful voice in world affairs at the war's end, he favored a policy of strict neutrality to hold America above the fray. When German submarine warfare brought the United States into the war, Wilson would seek to reform the world through his dominant voice in erecting the postwar peace structure.

Wilson's program for avoiding another catastrophic crisis, such as that of 1914, required both changes in the quality of national behavior and an international mechanism for settling international disputes peacefully. To that end, he believed it essential that the world relieve itself of the traditional accoutrements of power politics: the balance of power and the pursuit of national interests. His solution lay in the principle of collective security, in which all peace-loving nations would pledge themselves to joint action in behalf of peace. The necessary multilateral institutions, through which the protectors of the peace would function, took the form of the League of Nations and the World Court, both enforcing the rule of law. Wilson found additional hope for a peaceful future in the expansion of world commerce, operating under a body of most-favored-nation treaties that would assure equal access to world markets. The result would be both a more prosperous and a more peaceful international system. For Wilson, finally, the new world order would require the active leadership of the United States.

Wilson's vision of enduring peace required, as well, a democratic foundation that would assure the necessary fusion of policy and moral purpose. In his war message to Congress in April 1917, Wilson declared:

A steadfast concert for peace can never be maintained except by a partnership of democratic nations. No autocratic government could be trusted to keep faith within it or observe its covenants. It must be a league of honor, a partnership of opinion…. Only free peoples can hold their purpose and their honor steady to a common end and prefer the interests of mankind to any narrow interest of their own.

Wilson's faith in a concert of democracies to maintain the peace presumed a common interest that would eliminate conflict and war. In his advocacy of a world of law and order, Wilson identified the interests of humanity with the interests of the United States and other democratic, status quo powers. This vision of universal peace acquired its special appeal from Wilson's insistence that peace required not the wielding of superior power by advocates of the status quo, but the limitation of change to general agreement and the rule of law. In a world governed by law, based on a common interest in peace, neither the United States nor any other country had the right to bargain with aggressors over changes in established treaties. Peaceful change alone was a morally acceptable burden of diplomacy.

Unfortunately, the essential assumption of a common interest in peace ignored the reality that, while all nations favored peace, some favored the status quo and some did not. E. H. Carr addressed this dilemma in The Twenty Years' Crisis (1939): "The utopian assumption that there is a world interest in peace which is identifiable with the interest of each individual nation helped politicians and political writers everywhere to evade the unpalatable fact of a fundamental divergence of interest between nations desirous of maintaining the status quo and nations desiring to change it." Nowhere in the Wilsonian approach to international affairs was there any recognition of the persistence of conflict that defied easy solution or the need to define the interests of the United States in a still troubled world and prepare a strategy for their defense. It was not strange that wishful thinking and generalization soon prevailed over analysis of the ongoing realities of international life. The end of lasting and universal peace overwhelmed the problem of means. Wilson once quieted the doubts of his adversaries who questioned the effectiveness of the League of Nations by assuring them that "if it won't work, it must be made to work." Schemes for rendering the league effective did not require explanations of how they would work; the consequences of failure were too disastrous to contemplate.