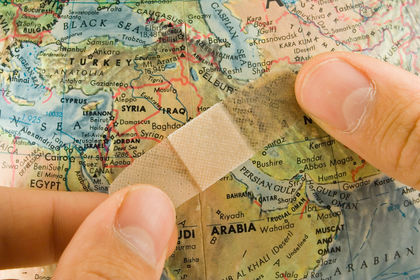 The end of the Cold War did not mean the end of all wars. In the middle of the apparent flood tide of democratization in Eastern Europe came Iraq's invasion and annexation of Kuwait in August 1990. Clearly, democracy was not the issue; neither in Iraq nor Kuwait could there be much hope of fostering self-determination. Nevertheless, by acting decisively Bush might give more shape to what he now called the New World Order that was to be crafted by American leadership. Most Americans cheered the rapid and enormously successful conclusion of the war against Iraq early in 1991. The war had nevertheless failed to dislodge Saddam Hussein from power. Moreover, the United States, for better or worse, found itself more deeply ensnared in the region's web of mortal hatred and intractable conflicts, from which no possibilities of self-determination seemed to emerge.

Caution, inconsistencies, and political expedience also characterized the American and, to a lesser degree, the European Community's initial response to Yugoslavia's self-determination crisis. Until hostilities broke out in mid-1991, the United States and the European governments asserted unconditional support for Yugoslav unity. That policy reflected, at least in part, concern that any splintering of Yugoslavia would be violent. When Serbia's strongly nationalist president, Slobodan Milosevic, began campaigning for a stronger Yugoslav federal center, calls among Slovenes, Croats, and Bosnians for a looser confederation or for outright secession multiplied. Slovenia, the most homogenous of the republics, had already taken its first steps toward independence in September 1989. In the fall of 1990 the Central Intelligence Agency reportedly predicted a breakup of Yugoslavia, probably involving civil war. Nevertheless, days after the May 1991 referendum in which Croatia's population voted overwhelmingly to secede, the United States remained firmly committed to the "territorial integrity" of Yugoslavia. Fighting erupted in June 1991 after Croatia and Slovenia formally declared their independence. As the war in Croatia escalated throughout the summer and fall of 1991, the issue of international recognition for the Yugoslav republics became more controversial. It was Germany that led the European Community to an agreement on a process for recognizing the republics of both the Soviet Union and Yugoslavia. In January 1992 the twelve EC countries, as well as several other European states and Canada, recognized both Slovenia and Croatia. The EC granted recognition to Bosnia-Herzegovina in April 1992, despite the fact that its referendum on independence had been largely boycotted by the Bosnian Serb minority.

UN Secretary General Javier Pérez de Cuéllar, along with the United States, opposed the European Community's moves toward recognition, fearing that such action would fatally undermine UN and EC peace initiatives. U.S. deputy secretary of state Lawrence Eagleburger warned EC members in December 1991 that early, separate recognition of Croatia and Slovenia would not only damage the prospect for peace but would "almost inevitably lead to greater bloodshed."

The issue was how best to prevent Serbian aggression while protecting the rights of the Serb minorities in Croatia and Bosnia-Herzegovina. After the EC announced its recognition guidelines, the United States reiterated four principles guiding its policies toward the republics of Yugoslavia, none of which acknowledged the prospect of secession, even though by December 1991 it could be fairly predicted as a strong possibility.

In April 1992 the United States recognized Slovenia, Croatia, and Bosnia-Herzegovina as independent states. Despite its recognition of Bosnia-Herzegovina and the pleas of that government for help against the onslaught of the Serb minority, the United States and the European Community were pitifully slow to initiate or support regional or international intervention to respond to aggression; "ethnic cleansing"; and other serious violations of international law, including international humanitarian law.

The war in Bosnia promoted a reappraisal of American foreign policy. Although President Bush had enunciated his support of a New World Order, in which weak countries would be free from fear of predation by the strong, American support for action against Saddam and his invasion of Kuwait rested on readily identifiable material interest, namely oil. Bosnia's misfortune was that it possessed nothing of vital interest or importance to Americans or other influential foreigners. Nevertheless, some who took the New World Order seriously believed that the United States would assist Bosnian Muslims despite Bosnia's lack of commercial commodities. Many of these likened the Serbs' ethnic cleansing to the Nazis' genocidal policies toward the Jews, and the failure of the United States and the other democracies to assist Bosnia to the failure to halt Hitler in the 1930s. Some Bosnia advocates called for direct American military intervention, even the introduction of ground troops. Others would have been content with the lifting of the international embargo of arms to the warring parties, claiming that it helped the better-equipped Serbs.

Also, while the Gulf crisis had found the United States and the Soviet Union in agreement, the situation in Bosnia promised to be more divisive. Given Russia's long-standing role as the protector of the Slavic and Orthodox Serbs, it was difficult to predict how the Russian government would react to strong U.S. action. In any case, neither the Bush administration nor, beginning in January 1993, that of Bill Clinton could count on Moscow's cooperation. Finally, many Americans argued that the problems in the Balkans were Europe's problems. Throughout the Cold War, the United States had looked after Europe. It was now time, they said, for the Europeans to start looking after themselves. In fact, there was a resounding lack of popular enthusiasm for intervention. While both administrations supported UN initiatives to ease the plight of the Bosnians and pressure the Serbs politically to curtail their offensives, neither took the step of committing American combat troops directly to the battle.

The Cold War had provided the United States with the basic principles on which it had conducted foreign policy for nearly half a century; with the end of the Cold War, the Clinton administration groped for a diplomatic formula to replace anticommunism as the guiding mechanism in America's foreign affairs. The international environment was no longer one of great power confrontation, but of numerous global hot spots that periodically threatened to boil over into major regional conflagrations. The Clinton administration generally tried to persuade international agencies, especially the United Nations and NATO, to support multilateral peacekeeping efforts, but often the United States was left alone to try to keep the lid on these flare-ups.

The Middle East remained a major source of trouble. With Norway's help in 1993, Israel and the PLO negotiated the Oslo Accords, which involved mutual recognition and Palestinian autonomy in Gaza and parts of the West Bank. In 1994 Jordan joined the peace process. In 1998 Clinton brokered a new set of agreements between the two sides in marathon meetings at the Wye Plantation in Maryland. This was followed by the Barak-Arafat summit of 2000. However, by the turn of the century, all of these agreements, which promised some measure of self-determination for the Palestinians, had proved ineffective.

Despite the failure of various attempts to change Serb behavior, Congress in the autumn of 1994 forced the Clinton administration to end its efforts to prevent Bosnia from receiving weapons. This move strained U.S. relations with the rest of NATO, but did little to halt the Balkan war. Neither did NATO air attacks, starting in February 1994, against Serbian planes and artillery. Despite these actions and the formation of a Croat-Muslim federation, Bosnian Serbs continued to displace Muslims from much of Bosnia. When Bosnian Serbs in July 1995 seized the safe havens of Srebrenica and Zepa and massacred thousands of Muslims within sight of UN peacekeepers, Washington flashed a green light whereupon the Croatian army overran Serb-held territory in northwestern Bosnia and NATO intensified its air attacks. As new refugees fled into Serbia, Slobodan Milosevic asserted his authority over the Bosnian Serbs and agreed to a cease-fire in October 1995.

At a peace conference in Dayton, Ohio, Assistant Secretary of State Richard Holbrooke "cajoled, harassed, and pressured" the presidents of Serbia, Bosnia, and Croatia into an agreement. The Dayton Accords of December 1995 retained a Croat-Muslim federation and a Serb Republic within a single Bosnian state, with Sarajevo to remain a multi-ethnic capital. The United States agreed to contribute 20,000 personnel as part of a 60,000-member NATO implementation force that would separate the parties and assist in reconstruction. Four years later, some 8,000 U.S. troops remained in Bosnia, having sustained a fragile peace at a cost of more than $7 billion. Deadlines for removing U.S. peacekeeping troops in Bosnia were abandoned as it became clear that they alone could prevent new hostilities.

In 1999, Kosovo, a Serbian province whose population was overwhelmingly ethnic Albanian, became the next Balkan crisis to spark international consequences. There, President Milosevic ordered a brutal ethnic cleansing. After he rejected NATO demands to halt the persecutions and preserve Kosovo's autonomy, NATO in March began to bomb military and communication sites in Serbia. The bombing unleashed even more cruelties in Kosovo as the Serbs systematically moved against ethnic Albanians, massacring and raping them, burning their homes, and forcing 800,000 of them to flee as refugees to neighboring Albania and Macedonia. However, Milosevic—bombed, encircled, and embargoed—relented in early June under an agreement to withdraw his forces from Kosovo, permit the return of refugees, accept a NATO security presence, and grant greater autonomy to Kosovo. The International War Crimes Tribunal at The Hague indicted Milosevic and his top aides for atrocities against the people of Kosovo. The planned expansion of NATO in 1999 to include Poland, Hungary, and the Czech Republic increased incentives to prevent more fighting and to keep refugees from spreading into Eastern Europe.