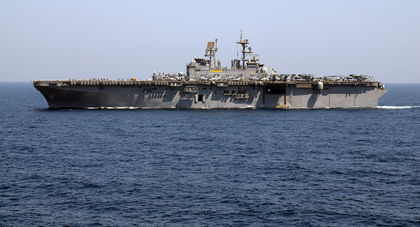 On 16–17 January 1991, viewers around the world watched the beginning of a war for the first time ever on live television. As allied bombs and cruise missiles hit targets in Iraq, CNN reporters described what they saw from their hotel in Baghdad during the first hours of the Persian Gulf War. The explosions had severed communications with other U.S. network reporters in the Iraqi capital. Using the telephone, CNN correspondents Peter Arnett, John Holliman, and Bernard Shaw acted much like radio reporters, since they were unable to transmit pictures of what they saw. "Now there's a huge fire that we've just seen," Holliman exclaimed. "And we just heard—whoa. Holy cow. That was a large air burst that we saw. It was filling the sky." "Go for it, guys," a CNN producer told the reporters. "The whole world's watching." One of those viewers was President George H. W. Bush, who said with relief that the war had begun, "just the way it was scheduled."

The reporting on that first night from Baghdad was exceptional, in part because government restrictions did not impede it. But Iraqi authorities established censorship within twenty-four hours after the start of the bombing and U.S. military officials imposed a system of restraints on the news media that had been years in the making.

Its outlines emerged in 1984, when the Pentagon responded to complaints about the exclusion of reporters from Grenada by creating a committee chaired by General Winant Sidle, who had served as a military information officer during the Vietnam War. The Sidle panel recognized that technological innovations—portable satellite antennas that made possible live broadcasting from the battlefield—might jeopardize the security of U.S. military operations or the safety of U.S. troops. It called on journalists to refrain from reporting sensitive information as a condition of their accreditation. If commanders decided that military considerations required limited access to combat areas, the Sidle panel recommended that small groups of journalists be allowed into battle zones and then share their reporting with their colleagues.

This pool system got its first test when U.S. troops invaded Panama in December 1989. Military transports carried reporters to base areas, but kept them sequestered during the first days of Operation Just Cause. Complaints about a system that seemed to keep reporters away from military action rather than to facilitate their access to it led to extended discussions between news organizations and military authorities during the buildup of U.S. forces in Saudi Arabia during late 1990. On the eve of Operation Desert Storm, the Pentagon announced new guidelines, which required journalists to participate in pools, exclude restricted information from their articles and broadcasts, and submit their reports to military officials for security review.

The legacies of Vietnam exerted a powerful influence on the Bush administration as it prepared for war. General Colin Powell, the chair of the Joint Chiefs of Staff, believed that Vietnam had shown that the American public simply would not tolerate a prolonged, televised war with heavy casualties. Bush thought that Vietnam had also proven other lessons. He insisted that the United States and its coalition partners must use overwhelming military force that would produce decisive results. The president did a masterly job of building public support for his demand that Iraqi troops withdraw from Kuwait and his determination to use force, if necessary, to achieve that goal. He portrayed Saddam Hussein as a kind of Middle Eastern Hitler—a dictator who brutalized Iraqis, an outlaw who defied fundamental principles of international order, and an aggressor who wanted weapons of mass destruction to threaten other nations. TV news provided other view-points, other voices, including Hussein's, as the Iraqi president granted interviews to several Western journalists, including news anchors Peter Jennings of ABC and Rather of CBS. The newscasts also covered the debate over the use of force, which Congress authorized on 12 January 1991. Polls showed that substantial majorities favored military action and endorsed Bush's handling of the crisis. Once the war began, the president enjoyed overwhelming public support for his policies.

TV's war coverage in some ways resembled a miniseries. The networks had distinctive titles—"War in the Gulf," " Showdown in the Gulf"—and accompanying music. A good deal of the coverage emphasized the drama of war—the danger of a sudden attack of Iraqi Scud missiles, the risks of flying into hostile fire, the heroism of U.S. troops and the sacrifices of their relatives at home.

Yet in all this reporting about war, TV provided an extremely limited view of the fighting. The Defense Department supplied most of the video of the air war. Recorded with night vision equipment, it seemed fantastic and futuristic, something that reminded many viewers of a video game. The pool system ensured that reporters would have few unregulated opportunities to cover combat. A handful of correspondents, like CBS's Bob Simon, went out into the Saudi desert without escorts. Simon's first such excursion produced a report from Khafji, near the border with Kuwait, where U.S. marines were under attack. On his next unescorted trip, Iraqi troops captured him; Simon and his crew remained prisoners until the end of the war. Although network newscasts ran several reports about what they bluntly called censorship, there was little public dissatisfaction with the Pentagon's restrictions. Viewers were far more interested in seeing the briefings of General H. Norman Schwarzkopf, commanding and apparently authoritative performances that made the general the greatest hero of the Gulf War.

The television journalist who got the most attention—much of it unwelcome—was CNN's Peter Arnett. When most reporters decided to put personal safety ahead of the story, Arnett decided to stay in Baghdad. When Iraqi authorities decided to expel the remaining Western TV correspondents during the first week of fighting, they excepted CNN, mainly because producer Robert Wiener had spent months building cooperative relations with government officials in Baghdad. Arnett had no competition, but he did have "minders," information officials who limited his movements and censored his reporting. Repeatedly Arnett pushed against those limits, for example, by arguing that his reports would have greater credibility if he could respond more freely to questions from CNN anchors during live broadcasts. His stories about civilian casualties during allied bombing raids—at a baby milk formula factory and an air raid shelter—stirred enormous controversy in the United States. The most extreme of many attacks on the alleged impropriety of reporting from behind enemy lines came from Republican representative Lawrence Coughlin of Pennsylvania, who denounced Arnett as "the Joseph Goebbels of Saddam Hussein's Hitler-like regime." Arnett disliked becoming part of the story, yet he stayed in Baghdad until the end of the ground war.

Arnett's reporting notwithstanding, Bush administration officials were pleased with television coverage of the Gulf War. Pete Williams, the Pentagon's chief public affairs officer, concluded that the news media had provided "the best war coverage we've ever had." Secretary of State James A. Baker spoke more candidly when he described "that poor demoralized rabble—outwitted, outflanked, outmaneuvered by the U.S. military. But I think, given time, the press will bounce back."