The Vietnam War and Its Impact 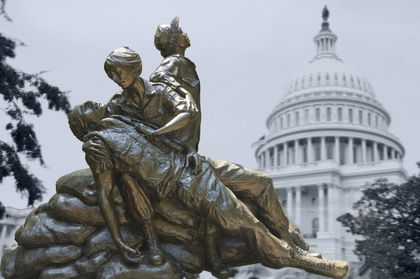 On 2 September 1945 at Hanoi's Ba Dinh Square, Ho Chi Minh issued the historic Vietnamese proclamation of independence with words borrowed from the American Declaration of Independence: "We hold the truth that all men are created equal, that they are endowed by their Creator certain unalienable rights, that among these are life, liberty and the pursuit of happiness." Ho Chi Minh—who four years earlier had founded the League for Revolution and Independence, or Vietminh—had been preparing his entire life for the opportunity to rid Vietnam of colonial rule, both Japanese and French. Crowds marched from one end of Saigon to the other chanting, "Do Dao de quoc, Do Dao thuc dan phap." (Down with the Imperialists, Down with the French Colonialists.) Throughout Vietnam banners proclaimed "Vietnam for the Vietnamese."

Ho Chi Minh requested support for his cause from nations that recognized the principles of self-determination and equality of nations. President Franklin D. Roosevelt seemed to favor an international trusteeship for Vietnam to be followed by independence, but new pressures would soon change the situation for Ho and the Vietnamese. As the Cold War developed, Washington became more sensitive to the colonial interests of its allies than to the decolonization of Indochina. Ho was defined as being pro-Moscow. U.S. Cold War policy was guided by the containment of a perceived Soviet aggression. Containment was composed of economic, political, and military initiatives that sought to maintain stability in the international arena. The bitter recriminations in the United States over "who lost China?" after 1949 led the Truman administration to do what it could to prevent a Vietminh victory in Vietnam or anywhere else in Indochina. Vietnam was valued not for its own merit, but was seen rather as a test of America's global position and credibility. In December 1950, the United States joined France and the French-controlled governments of Vietnam, Cambodia, and Laos in signing the Mutual Defense Assistance Agreement. The United States agreed to provide military supplies and equipment through a military advisory group. This small contingent of U.S. advisers provided limited logistical services; all supplies and equipment were dispensed through the French Expeditionary Corps. U.S. aid to the French military effort mounted from $130 million in 1950 to $800 million in 1953.

In May 1953 the French government appointed General Henri Navarre commander in Vietnam and charged him with mounting a major new offensive against the Vietminh. One of Navarre's first moves, late in 1953, was to dispatch French troops to Dien Bien Phu, the juncture of a number of roads in northwestern Indochina about 100 miles from the Chinese border. On 7 May 1954 the French forces were defeated there. Shortly thereafter the Geneva Conference was held, bringing together representatives of Vietminh-controlled territory and Bao Dai's French-controlled government—which would later evolve into North and South Vietnam, respectively—the other emerging Indochinese states of Laos and Cambodia, and the major powers of France, Britain, the United States, the Soviet Union, and the People's Republic of China. The Geneva Accords, formally known as the Final Declaration of the Geneva Conference on the Problem of Restoring Peace in Indochina, essentially settled military but not political issues.

The Vietminh controlled most of Vietnam and sought a political settlement at Geneva that would lead to the withdrawal of French forces and the establishment of an independent government led by Ho Chi Minh. But at the Geneva Conference, Anthony Eden of the United Kingdom, Pierre Mendès-France of France, Vyacheslav Molotov of the Soviet Union, and Chou En-lai of China pressured the Vietminh, through its representative, Pham Van Dong, to accept much less than it had won in battle. Under great pressure in particular from the Chinese and Soviets, who feared American military intervention under Secretary of State John Foster Dulles, Ho made two major concessions—a provisional demarcation line drawn at the seventeenth parallel and free nationwide elections for unifying the country supervised by an international commission scheduled for 1956. The election was intended to settle the question of political control over Vietnam. Externally, the accords provided for a neutral Vietnam, meaning that no military alliances were to be made by either side.

strategically South Vietnam's capture by the Communists would bring their power several hundred miles into a hitherto free region. The remaining countries in Southeast Asia would be menaced by a great flanking movement. The freedom of 12 million people would be lost immediately and that of 150 million others in adjacent lands would be seriously endangered. The loss the Republic of Vietnam, or South Vietnam, would have grave consequences for us and for freedom.

Eisenhower had also articulated the line of reasoning that came to be known as the domino theory, that the fall of one state to communism would lead to the next and the next being knocked over. Not losing Southeast Asia thus became the goal of the United States.

In an October 1954 letter to the president of South Vietnam, Ngo Dinh Diem, President Eisenhower was exceedingly clear:

I am, accordingly, instructing the American Ambassador to Vietnam to examine with you in your capacity as chief of Government, how an intelligent program of American aid given directly to your Government can serve to assist Vietnam in its present hour of trial, provided that your Government is prepared to give assurances as to the standards of performance it would be able to maintain in the event such aid were supplied. The purpose of this offer is to assist the government of Vietnam in developing and maintaining a strong, viable state, capable of resisting attempted subversion or aggression through military means.

By 1961 Vietnam loomed as a test of President John F. Kennedy's inaugural commitment "to pay any price, to bear any burden, in the defense of freedom." But Diem's government had evolved into a family oligarchy that ruled through force and repression. Opposition grew from a wide range of political, social, and religious groups. Protests raged, including the quite dramatic self-immolations by Buddhist monks. On 1 November 1963, Diem was removed from office and murdered in the back of a U.S.-built personnel carrier. The coup was planned and implemented by South Vietnamese military officers; U.S. ambassador Henry Cabot Lodge and the Central Intelligence Agency (CIA) were involved. Kennedy, given the opportunity to instruct Lodge that the coup be stopped, issued no such order.

Diem's death was followed by a period of great political instability in Saigon, while three weeks after the coup Kennedy was assassinated in Dallas. His successor, President Lyndon B. Johnson, assumed office with the belief that the United States had to ensure the stability and security of South Vietnam. Momentum was building in favor of action that might reverse the disintegrating political conditions in South Vietnam, which was under military pressure from the North Vietnamese–backed National Liberation Front (NLF), or Vietcong (VC). One form of new activity involved U.S. Navy patrols up the Gulf of Tonkin for intelligence-gathering purposes. On 2 August 1964 the destroyer Maddox was returning from one of these DeSoto electronic espionage missions when North Vietnamese torpedo boats fired on the ship. Rather than withdrawing U.S. ships from the danger zone, the president ordered another destroyer, the C. Turner Joy, to join the Maddox in the Gulf of Tonkin. On 4 August both the Maddox and the C. Turner Joy reportedly came under attack. The president later met with congressional leaders and sought assurance that his response would be supported.

On 10 August 1964, Congress passed the Southeast Asia Resolution, also known as the Tonkin Gulf Resolution, which authorized Johnson "to take all necessary measures to repel any armed attack against the forces of the United States and to prevent further aggression." The president later used the resolution to justify his escalation of American involvement in Vietnam. With the 1964 presidential election against Republican conservative Barry Goldwater less than three months away, however, he had no desire to be portrayed as planning for war. Instead, he left the rhetoric of war to Goldwater and the planning to his military advisers. "Peace candidate" Johnson won the election in a landslide.

Vietnam and the united states

The pow and mia crusade

Berman, Larry. Planning a Tragedy: The Americanization of the War in Vietnam. New York, 1982. A detailed archival-based account of the crucial July 1965 decision that Americanized the war in Vietnam.

——. No Peace, No Honor: Nixon, Kissinger, and Betrayal in Vietnam. New York, 2001. Drawing on new declassified documents, the case is presented that Nixon and Kissinger viewed the Paris accords as a vehicle for prolonging indefinitely American involvement in Southeast Asia.

Brigham, Robert K. Guerrilla Diplomacy: The NLF's Foreign Relations and the Viet Nam War. Ithaca, N.Y., 1999. The very best account of the NLF's activities during the war. The author utilizes many primary source documents from Hanoi archives and interviews with many Vietnamese leaders.

Chanoff, David, and Doan Van Toai. Vietnam: A Portrait of Its People at War. New York, 1986.

Clodfelter, Mark. The Limits of Air Power: The American Bombing of North Vietnam. New York, 1989. The most comprehensive account on the subject of U.S. airpower and strategy during the war.

Diem, Bui, and David Chanoff. In the Jaws of History. Boston, 1987. Diem, the former Vietnam ambassador to the United States, offers a gripping personal and political account of his life and the struggle for democracy in Vietnam.

Gaiduk, I. V. The Soviet Union and the Vietnam War. Chicago, 1996. A seminal contribution that draws on Soviet archives to advance understanding of Soviet ideology and policy during the war.

Hung, Nguyen Tien, and Jerrold L. Schecter. The Palace File. New York, 1986. Based on more than thirty previously unpublished letters between South Vietnam's President Thieu and U.S. Presidents Nixon and Ford, the book documents the broken promises that resulted in the fall of South Vietnam.

Karnow, Stanley. Vietnam: A History. New York, 1991. This monumental narrative clarifies and analyzes the many facets of the Vietnam War.

Logevall, Fredrik. Choosing War: The Lost Chance for Peace and the Escalation of War in Vietnam. Berkeley, Calif., 1999. The first truly comprehensive examination of the making of the war in Vietnam from 1963 to 1965. Develops an international context for the author's analysis and documents that at every step American decision makers chose war over disengagement.

McNamara, Robert S. In Retrospect: The Tragedy and Lessons of Vietnam. New York, 1995.

——. Argument Without End: In Search of Answers to the Vietnam Tragedy. New York, 1999. Provides a new view of the Vietnam conflict by offering the assessments of what went on in the minds of decision makers in Hanoi and Washington as they confronted one another. The Vietnamese perspectives are especially valuable for the historical record.

Sorley, Lewis. A Better War: The Unexamined Victories and Final Tragedy of America's Last Years in Vietnam. New York, 1999. Draws on many previously unavailable documents and provides a valuable interpretation for American strategy and policies during the war.

Zhai, Qiang. China and the Vietnam Wars, 1950–1975. Chapel Hill, N.C., 2000. In examining China's conduct toward Vietnam, Zhai provides important insights into Mao Zedong's foreign policy and the ideological and geopolitical motives behind it.

I am a college student doing a paper for my english class. This resource was very helpful.