The Constitution - The treaty power 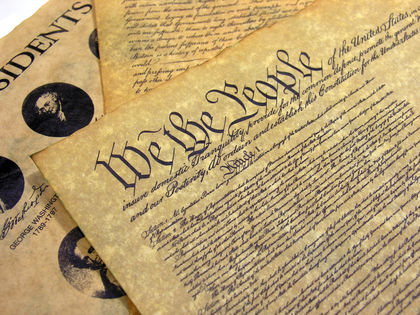 Assumption of broad foreign relations powers by the executive, largely built atop the removal of specific checks by the Senate, has claimed the treaty power as one of its principal casualties. The diminution of the Senate's constitutional role as a treaty partner could not have been envisioned by the Constitutional Convention, which, with less than two weeks left in its proceedings, vested in the Senate alone the power to make treaties. As late as 6 September, the draft constitution of the Committee on Detail had given the Senate the exclusive authority to make treaties and appoint ambassadors. During the debate Madison pointed out that the "Senate represented the states alone," and, consequently, "the president should be an agent in Treaties." Madison, who hailed from Virginia, along with other delegates from large states, were concerned about Senate control of the treaty power. As a result of "the Great Compromise," which gave states equal representation in the Senate, large-state delegates were seeking means to control the Senate. They feared that the Senate would be convulsed by regional economic and state interests that would compromise the national interests in the pursuit of commercial treaties. A version of Madison's proposal eventually prevailed. Article 2 of the Constitution gives the president the "power, by and with the Advice and Consent of the Senate, to make Treaties, provided two thirds of the Senators present concur."

The convention's belated addition of the president to the treaty-making power reflected the Framers' desire to "check" the Senate in the formulation of foreign policy, an application to foreign relations of the doctrine of checks and balances and collective decision-making. There was nothing in the language of the provision, or in the records of the convention debates, to indicate that the president would assume the dominant role in foreign affairs. There was no hint that the president would enjoy any significant independent role in treaty-making. The requirement of a two-thirds majority acted to limit any independent power of the president in foreign relations. In fact, as Hamilton explained in Federalist No. 75, "the vast importance of the trust, and the operation of treaties as laws, plead strongly for the participation of the whole or a portion of the legislative body in the making of them…. It must indeed be clear to a demonstration that the joint possession of the power in question, by the president and Senate, would afford a greater prospect of security, than the separate possession of it by either of them." Hamilton's emphasis on the cooperative nature of treaty-making, from negotiation through ratification, is reflected in the further requirement of senatorial "advice and consent." The Framers borrowed the phrase from English parliamentary practice, which was descriptive of continuous participation in lawmaking. No bill could be enacted into law by the king without the advice and consent of both houses of Parliament. The employment of that phrase in the treaty clause was meant to convey Senate participation in all stages of treaty-making. It is not suggestive in any way of a treaty-making process that is divided into two distinct stages: negotiation by the president and approval by the Senate. But that phrase is otherwise employed in the appointment clause to indicate a process that does depend on exclusive and sequential steps: the president "shall nominate, and by and with the Advice and Consent of the Senate, shall appoint Ambassadors."

When President George Washington first communicated with the Senate regarding the appropriate procedure for treaties, he assumed the process of negotiating treaties was a matter of joint participation. He advised a Senate committee that oral communications "seem indispensably necessary; because in these a variety of matters are contained, all of which not only require consideration, but some of them may undergo much discussion; to do which by written communications would be tedious without being satisfactory." This approach indicates an active, continuous, consultative role for the Senate. Washington, moreover, repeatedly expressed his intention to send "propositions" to the Senate, a solicitation of Senate "advice" on of treaties.

In a well-known message to the Senate on 21 August 1789, Washington stated his intention to meet with senators in the Senate chamber "to advise with them on the terms of the treaty to be negotiated with the Southern Indians." Washington intended to seek the Senate's advice before, not after, the negotiation of a treaty. He met with senators the next day, put to them a series of questions, and sought their advice on the instructions that should be given to the commissioners selected to negotiate the treaty. Both sides were disappointed. Senators exhibited unease in relying solely on the information supplied by the secretary of war, who had accompanied Washington. The noise from carriages traveling past the chambers made it difficult to follow the discussion. When the senators announced that they would not commit themselves to any positions that day, Washington felt inconvenienced by the trip. He returned two days later and obtained the Senate's answers to his questions and its consent to the treaty, but he never again went to seek the Senate's advice on a treaty proposal.

It is a misreading of the incident to conclude that Washington had determined to exclude the Senate from any role in the negotiation process. Oral communications proved to be impracticable; but Washington continued to seek the Senate's advice through written communications rather than personal appearances. Senators were asked to approve the appointment of treaty negotiators and to advise on their negotiating instructions. Since the earliest day of the Republic, there have been many examples of executive-Senate discussions regarding treaty negotiations.

The twentieth century, however, witnessed the erosion of this joint effort and the assumption by presidents that negotiation was an exclusively executive concern. As an academic, Woodrow Wilson had argued, in Congressional Government (1885), that the president could treat the Senate with indifference. He encouraged the president to pursue negotiations independently, without consulting the Senate. He reasoned that after these unilateral actions, the Senate could be bullied into granting its "consent," if not its "advice," with the nation's honor at stake. This "mousetrap theory" had disastrous consequences for the nation in the aftermath of World War I. One of Wilson's gravest miscalculations was his decision to exclude prominent senators from the negotiation of the Versailles treaty. Efforts by the executive to present the Senate with a fait accompli can backfire; the Senate may retaliate by adding amendments, shelving treaties, or rejecting them outright.

While the Constitution requires joint action by the president and Senate in making treaties, it is silent on the repository of the authority to terminate treaties. The Framers certainly were aware of the fact that treaties, for a variety of reasons, might require termination, and international law provided rules and regulations to govern their repeal. Madison and Jay, among others, seemed to believe that treaties ought to be terminated by the president and the Senate, and, historically, some have. But the historical record also includes repeal by unilateral presidential action and by Congress as a whole. Since Article 6 vests treaties with the same domestic status as federal statutes, treaties may be terminated by subsequent acts of Congress through the regular legislative process. The fact that the House of Representatives, which is not a part of the treaty power, can play a role in terminating, if not making, treaties, may appear to be anomalous. The same may be said of the argument for a unilateral presidential termination power, which would negate the philosophy of the convention and the entire foreign policy apparatus, which is erected on the premise of collective decisionmaking. The issue of the authority to terminate treaties came to a head in 1979 with President Jimmy Carter's announcement that he intended to terminate the 1954 mutual defense treaty with Taiwan. The decision resulted in a lawsuit, Goldwater v. Carter (1979), in which the Supreme Court declined to reach the merits of the case and dismissed it as "nonjusticiable." The practical effect of the decision left President Carter's act of termination intact. While the question of treaty termination was pushed aside temporarily, it seemed likely to become prominent again.

The president and the Senate may clash over the continued meaning of a treaty. Once a treaty takes effect, the president is principally responsible for its interpretations and implementation. A treaty is a law, and under the Constitution the president is charged with its faithful execution. But a president may not "reinterpret," that is, ascribe to a treaty a meaning contrary to what the Senate understood it to mean at the time it granted its consent. Disagreements have arisen between the president and the Senate on interpretations of the 1972 Anti-Ballistic Missile (ABM) Treaty, on the question of the amenability of that treaty to the development of new weapons systems. As a result it is likely that the Senate will carefully examine future treaties and make publicly known in clear terms its understanding of particular treaty provisions.