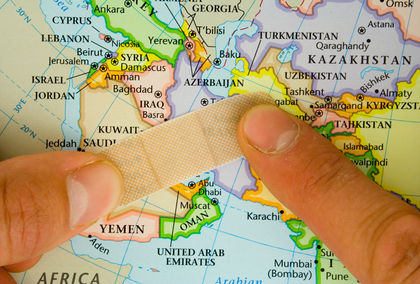 World War I nevertheless proved to be the first clear indicator that the United States, would, by virtue of its new power position, find it difficult, and perhaps also undesirable, to remain "unentangled." Since the conflict pitted many ideological friends and major trading partners of the United States against a group of European autocracies—most particularly after the March Revolution of 1917 in Russia—it proved extraordinarily difficult, even for the president himself, to heed Wilson's admonition to be "impartial in thought as well as in action." The wartime increase in trade flowed naturally into previously developed channels, and loans and credits largely followed the route of established business connections, thus not only favoring one set of belligerents and arousing the ire of the other but giving the United States a tangible stake in the outcome of the war.

Even aside from such specific considerations, the possibility that nations with political systems and economic aims different from those of the United States might dominate the world after the war could be ignored only with difficulty. For all of his original devotion to neutrality, Wilson himself was moved to his desire for a negotiated "peace without victory" at least in part because he found one of the other alternatives—the victory of the Central Powers—to be wholly incompatible with American interests. "The world," he was to say in his declaration of war, "must be made safe for democracy."

The situation of the United States during World War I brought respectability for the first time to the proposition that, given its changed world position, the United States might best protect its interests by more active cooperation with other nations, even through commitments and alliances not in keeping with the traditional policy. Wilson's espousal of such ideas led him to propose a League of Nations, which required full-fledged American participation in a system of collective security. Others with similar views joined together in June 1915 to found the League to Enforce Peace, an American counterpart to the Netherlands-based Organisation Centrale pour une Paix Durable. Among the leaders of the new organization were former president William Howard Taft, President A. Lawrence Lowell of Harvard, and Hamilton Holt, the influential editor of the Independent.

This initial articulation of an approach to foreign policy that differed from the traditional one chiefly in its espousal of collective action as a necessary element in the defense of the national interest produced, in its turn, the defensive position generally called isolationism. In the context of the time, it amounted to an assertion, implicit or explicit, that changed world conditions had not made a departure from traditional policies either necessary or desirable and that entanglement in what continued to be regarded as the affairs of other nations was more dangerous to the United States than any conceivable result of continued noninvolvement. Among the early isolationists, in this sense, were Secretary of State William Jennings Bryan, Senators William E. Borah of Idaho and George W. Norris of Nebraska, and the pacifist-intellectual Randolph S. Bourne. On a popular level, such sentiments found support in the Hearst press beginning in early 1917.

Although the occasion for this development of an isolationist position was the debate over American entry into World War I, the actual declaration of war did not prove to be the really divisive issue. If the United States entered the war on its own volition and in defense of its own interests, such a step did not necessarily violate traditional policy, particularly not if it fought, as it did, not in formal alliance with other nations, but simply as an "associated power." Accordingly, a number of confirmed isolationists in the Senate voted for war. Among these were not only Democrats like Charles S. Thomas of Colorado and Thomas P. Gore of Oklahoma, who might be considered to have put partisanship ahead of conviction, but also Republicans Joseph I. France of Maryland, Hiram Johnson of California, and Borah.

Wilson soon realized, however, that any serious effort to make the world safe for democracy required that the United States enter into de facto alliance with the European powers, under whatever label, so that he himself would be able to exert the leadership necessary to the attainment of that objective. In his Fourteen Points address of 18 January 1918 he in effect supplied all of the Allies with a set of war aims that included the removal of economic barriers among nations, the adjustment of competing colonial claims, the freedom of the seas, and a "general association of nations" to secure "mutual guarantees of political independence and territorial integrity to great and small states alike." Less than a year later, he went to Paris in an effort to have these objectives, especially the establishment of a League of Nations, incorporated in the Treaty of Versailles that ended the war.

America's entry into the League of Nations would have been an obvious violation of the traditional policy. The league was clearly an alliance, an open-ended commitment of the very sort against which the Founders had warned. Wilson in fact promoted U.S. participation in the international organization as "an entirely new course of action" made necessary by the fact that the isolation of the United States was at an end, "not because we chose to go into the politics of the world, but because by the sheer genius of this people and the growth of our power we have become a determining factor in the history of mankind and after you have become a determining factor you cannot remain isolated, whether you want to or not."

The isolationists would have none of that. They generally agreed with the contention that isolation was no longer a realistic aim, if indeed it had ever been one, but took sharp issue with the proposed policy reversal. "We may set aside all this empty talk about isolation," Henry Cabot Lodge of Massachusetts, the chairman of the Senate's Committee on Foreign Relations, told his colleagues in 1919. "Nobody expects to isolate the United States or make it a hermit Nation, which is sheer absurdity." At the same time, however, he warned against the injury the United States would do itself by "meddling in all the differences which may arise among any portion or fragment of humankind" and urged continued adherence to "the policy of Washington and Hamilton, of Jefferson and Monroe, under which we have risen to our present greatness and prosperity." The Senate debate over ratification of the Treaty of Versailles sharpened and clarified the isolationist position. It turned entirely on the question of America's so-called meddling, and set the course of American foreign policy for the next two decades.