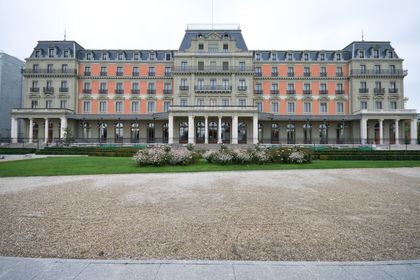 The international disturbances of the troubled 1930s began with the Japanese extension of military control over Manchuria in 1931. This was followed by the Italian campaign in Ethiopia in 1935 and Adolf Hitler's demands that the "fetters of Versailles" be smashed and that the German nation be allowed lebensraum (living space) for expansion. In 1936, Germany reoccupied the Rhineland (where, by the terms of the Versailles Treaty, it was not supposed to have armed forces) and in 1938 annexed Austria. Czechoslovakia followed in 1939. Faced with this determined assault on the post–World War I boundaries, diplomats in western Europe and in the Soviet Union, which joined the league in 1934, sought to make the machinery of the league an effective tool of war prevention by means of collective action against "aggression."

The attempt was not successful. Although Japan received a verbal rebuke from the league in 1933 for its behavior in Manchuria, it simply resigned from the league and did not end its forward policies in China, which may even have been stimulated by what was construed in Japan as a hypocritical insult. Following the eloquent appeal of Ethiopian emperor Haile Selassie for aid, the league, under British leadership, tried to organize economic sanctions against Italy in 1935, but that did not prevent the Italian conquest of Ethiopia and probably helped move Benito Mussolini closer to Hitler's side. The embargo was not sufficiently enforceable to be effective. This fiasco, which ended in a British-French retreat from high principles to offer Italy a compromise deal (the Hoare-Laval proposals), did much to diminish enthusiasm for collective security through the League of Nations. Direct negotiations between the major European powers during the tense crises of 1938 and 1939 bypassed the machinery of the league.

But many came to believe that a more vigorous and less selfish support of the league might have checked the aggressions of Japan, Italy, and Germany and prevented World War II. In much of the literature on the origins of the war, collective security appeared as the opposite of "appeasement," which had gambled on winning the goodwill of Germany by yielding to its demands. The lesson that one should never appease (yield to) the demands of an aggressive "criminal" nation became deeply engraved in the public mind during the grim years when Hitler's appetite only grew with eating. And the dishonor of the 1938 Munich "appeasement" did not prevent war the following year. Popular, too, was a similar thesis applied to Japan's expansion in the Pacific. Between 1938 and 1941, American opinion shifted dramatically toward the view that isolationism, or the avoidance of American responsibility to keep the world secure from aggression, had been a fearful blunder. To this was added the widespread belief that the United States should have followed Wilson's vision, joined the League of Nations, upheld collective security, and thus prevented World War II.

Critics were to cast doubt on this interpretation insofar as it involved the assumption that the league represented anything more than the sum of its parts. The league obviously commanded no military power of its own. If Great Britain, France, the Soviet Union, and the United States could not see their way to thwarting Hitler's goals at the risk of war, as a matter of national interest, the league could not help them. If they would not help the league, it was impotent. The league might at most supply convenient machinery or a meeting place, but what really mattered was the will to resist, which was notably lacking in the democracies in these years. Some argued that the idea of collective security was even an obstacle to a firm policy, because public opinion at times, as in England in the mid-1930s, tended to look upon collective security and the league as a substitute for national power. Evidently, some people thought that if only the problem of stopping the dictators could be turned over to Geneva, nothing need be done by the separate nations. This clearly was a dangerous illusion.

The attempt was not successful. Although Japan received a verbal rebuke from the league in 1933 for its behavior in Manchuria, it simply resig