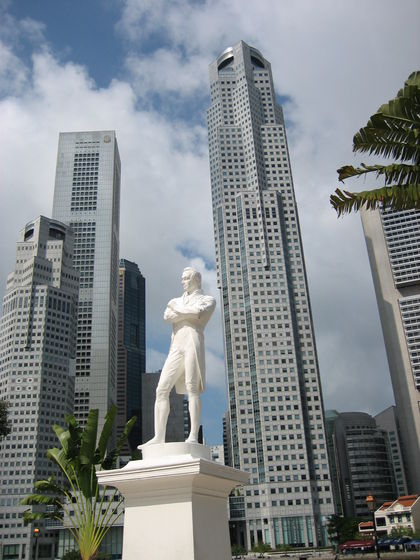 Traditionally, colonialism is understood to refer to an area of the world acquired by conquering the territory or settling it with inhabitants of the nation holding it in control, thereby imposing physical control over the region and its population. There are two ways this condition may be terminated: the area may be freed of the control of the colonial power by allowing it to become an independent nation, or if the area is absorbed into the borders of the controlling nation.

The United States began its history as a colonial possession of Great Britain and confronted two other colonial powers in contiguous areas during its infancy and contested France and Spain for control of that territory. After the American Revolution, gradually the European powers were expelled, and the new United States expanded its influence by absorbing the contiguous territories until it controlled the area it occupies today. (Later, Russia was one of those powers expelled.) A debate has ensued concerning whether in this process the United States became a colonial power by its absorption of these areas. This discourse continues, but by the traditional definitions of colonialism, the American experience is quite different from that which characterized the European colonial tradition, as it was not until the late nineteenth century that the United States entered the race for noncontiguous colonies.

With the elimination of colonialism per se in the twentieth century, there emerged a new form, called neocolonialism, which may be defined as the establishment of a form of sovereignty or control without the encumbrance of physical possession or actual colonial rule. Here, the United States may be defined as a neocolonial power because it influences less powerful or Third World nations by its economic authority exercised through its control or preeminent influence on such agencies as the World Bank and the International Monetary Fund. When this new colonialism began is another debatable question, but there can be no argument with the assertion that it was certainly in place shortly after World War II and may have begun with the Marshall Plan.

Asia and the pacific

Easton, Stewart Copinger. The Rise and Fall of Western Colonialism: A Historical Survey from the Early Nineteenth Century to the Present. New York, 1964. Examines the motives and processes of colonial expansion and development in the nineteenth century and traces the reasons for the decline of colonialism and what happened to the colonial areas through 1964.

Graebner, Norman A., ed. Ideas and Diplomacy: Readings in the Intellectual Tradition of American Foreign Policy. New York, 1964. Argues that the new colonialism at the end of the nineteenth century was as much motivated by a quest for prestige as for economic advantages and that strategic position for security was always a part of the American strategy.

Hunt, Michael H. Frontier Defense and the Open Door: Manchuria in Chinese-American Relations, 1895–1911. New Haven, Conn., 1973. Focuses on the attempts of the Chinese to use the United States to bolster defense of China's frontiers.

Kennan, George F. American Diplomacy: 1900–1950. Chicago, 1951. Expanded edition, Chicago, 1984. A series of lectures for the Walgreen Foundation at the University of Chicago in 1950; provides a realist viewpoint on the development of American foreign policy at the turn of the century.

Kupchan, Charles A. The Vulnerability of Empire. Ithaca, N.Y., 1994. Examines the structure of empires and in the case of the United States gives security motives for the foundation of American neocolonialism.

LaFeber, Walter. The New Empire: An Interpretation of American Expansion, 1860–1898. Ithaca, N.Y., 1963. The author is more inclined to credit motives other than economic as contributing factors to America's colonial experiment, but argues that the empire was consciously acquired as a part of the traditional role of expansionism in American history.

Obadina, Tunde. The Myth of Neo-Colonialism ( www.afbis.com/analysis/neo-colonialism.html ). Provides a very perceptive assessment of the arguments for and against colonialism in its influence on African nations.

Pratt, Julius W. Expansionists of 1898: The Acquisition of Hawaii and the Spanish Islands. Baltimore, 1936. The first important study that submitted the war and the imperial thrust to a multicausationist analysis.

Stuart Peter C. Isles of Empire: The United States and Its Overseas Possessions. Lanham, Md., 1999. Clearly defines the continuing debate over whether the United States is or has been a true colonial power and concludes it is and was but not without internal dissent over the issue.

Tompkins, E. Berkeley. Anti-Imperialism in the United States: The Great Debate, 1890–1920. Philadelphia, 1970. A careful tracing of the debate over whether the United States should assume an empire.

Van Alstyne, Richard Warner. The Rising American Empire. New York, 1960. Argues that imperial expansion was part of American historical development and disagrees with the traditionalists that it was a departure from tradition.

Verlinden, Charles. The Beginnings of Modern Colonization: Eleven Essays with an Introduction. Ithaca, N.Y., 1970. Translated by Yvonne Freccero, this is a good description of the beginnings of colonialism in the fifteenth century and offers some explanations for its development in Western civilization.

Williams, William Appleman. The Roots of the Modern American Empire: A Study of the Growth and Shaping of Social Consciousness in a Marketplace Society. New York, 1969. Presents the United States as imperialistic from its inception and the colonial expansion at the end of the nineteenth century as a further expression of the traditional posture of an economically oriented society.

Young, Marilyn Blatt. The Rhetoric of Empire: American China Policy, 1895–1901. Cambridge, Mass., 1968. Does not believe the Open Door policy was effective, in part because the Department of State did not limit application of the policy to the extent that the United States was willing to enforce it.

Also read article about Colonialism and Neocolonialism from Wikipedia

Ever since the beginning of the Cold War, the United States has psuured an imperialistic foreign policy that has the same characteristics as that of any other imperialistic nation, including Belgium's colonization of the Congo that is portrayed in Heart of Darkness. What all imperialistic nations, including the United States during the Cold War and today, share is the humanitarian excuse they use to justify their imperialistic policies. In Heart of Darkness, the Company's employees and Europeans in general all claim that the reason why they're colonizing the Congo is to spread civilization and eradicate the barbaric aspect of Africa. Similarly, during the Cold War, the United States followed in the footsteps of all imperialistic nations by claiming that the only goal of its interventionist foreign policy is to spread democracy and save the world from the great evil , communism. Today, the United States still pursues an interventionist foreign policy in the Middle-East, justifying their imperialistic policies by claiming to spread democracy to dictatorial nations such as Iraq, and defending the world from the threat of terrorism. However, at the core of both Belgium's and America's imperialistic foreign policies is economic interest. In the Congo, Belgium was exploiting the former's abundance of natural resources. During the Cold War, the US was protecting its economic interests and those of large US corporations such as the United Fruit Company. To do so, the US had no problem overthrowing the democratically elected Salvador Allende in Chile and replacing him with the dictator, Pinochet; in Guatemala, when President Arbenz's policies posed a threat to the United Fruit Company's interests, the CIA did not think twice before overthrowing him. This trend in US foreign policy continues today as the US has military bases and troops deployed all around the Middle East to protect its oil interests. Thus, we can see a clear continuation of Belgian colonialism as portrayed in Heart of Darkness and American imperialism in Vietnam as portrayed in Apocalypse Now in the US foreign policy throughout the Cold War and in the Middle East today.a0