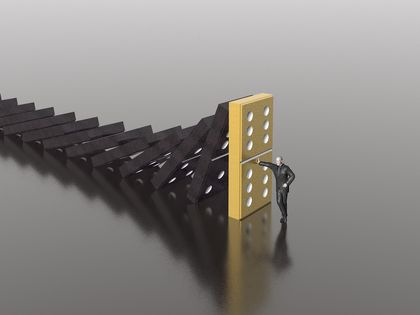 Vietnamese communist leaders founded the Democratic Republic of Vietnam in 1945, but it took them until 1975 to achieve control of the whole country. For most of that thirty-year period, there were people who argued that communist control of Vietnam must be blocked, not just for the sake of Vietnam itself, but to prevent communism from spreading through Vietnam to other countries.

Historically, the spread of communism had usually involved proximity; of all the countries that were communist during the Vietnam War, only the Soviet Union and Cuba had become so without bordering on lands already under communist control. It was easy enough, therefore, to argue that if Vietnam were to become communist, this would increase the threat to neighboring countries. Some people did make the argument in this reasonable and realistic form. Others, however, found it inadequate. The only country bordering on Vietnam that did not already have a communist neighbor was Cambodia, a country of which few Americans had much awareness. To say that if Vietnam fell, Cambodia would be endangered, might not stir drastic action. To inspire a massive effort to save Vietnam, it was necessary to predict that a massive disaster would result if Vietnam were allowed to fall—great danger or even certain doom for a whole string of countries, most of which did not border on Vietnam. This prediction was given the name "domino theory" after President Dwight D. Eisenhower's classic statement of it at a press conference on 7 April 1954:

Finally, you have broader considerations that might follow what you would call the "falling domino" principle. You have a row of dominoes set up, you knock over the first one, and what will happen to the last one is the certainty that it will go over very quickly…. When we come to the possible sequence of events, the loss of Indochina, of Burma, of Thailand, of the [Malay] Peninsula, and Indonesia …

Eisenhower's language was contradictory; first he referred to the "certainty" that the last domino in the string would fall if the first one did, but then he referred to the "possible" sequence of events. Eisenhower seems not in fact to have believed that the fall of Indochina would be certain to trigger the fall of a whole string of other countries; he only thought the danger was very great. Others committed themselves more firmly to a prediction of doom. A few months before Eisenhower's press conference, Donald R. Heath—the U.S. ambassador to the Associated States of Indochina (Vietnam, Laos, and Cambodia)—had written that if the French abandoned their effort to save Indochina, "Only the blind could doubt the immediate Communist engulfment of Southeast Asia."

Some versions of the theory envisioned a longer row of dominoes than others. Eisenhower's classic statement had predicted the fall of everything down to Indonesia, but not of the Philippines or countries beyond. That was about average. Modest versions of the theory reached only as far as the fall of Thailand. The most extreme ones reached very far indeed. Thus, Walt W. Rostow, formerly Lyndon Johnson's national security adviser, said in 1969, the year the withdrawal of U.S. troops from Vietnam began, "There's nobody in Asia who doesn't understand that if we pull out of Vietnam, we'd have to pull out of all of Asia, the place would fall."

Even in its weaker form, with the fall of the dominoes treated only as a danger, not a certainty, the theory was a strange one. There was no previous country the fall of which to communism had triggered the rapid fall of a whole string of other countries. Why should it have been thought probable, or even possible, that the consequences following from the fall of Vietnam would be so much greater than those that had followed from the fall of China?

Origins of the theory

The theory extends to asia

The 1960s: high tide of the domino theory

Ninkovich, Frank. Modernity and Power: A History of the Domino Theory in the Twentieth Century. Chicago, 1994. Traces American statesmen's fears about international security, fears that eventually evolved into the domino theory, back as far as Woodrow Wilson and even Theodore Roosevelt.

U.S. General Services Administration. Public Papers of the Presidents of the United States. 33 vols. Washington, D.C., 1961–1974. Contains virtually everything Presidents Truman through Nixon said in public about the domino theory.

See also Containment ; The Vietnam War and Its Impact .

Also read article about The Domino Theory from Wikipedia