The Vietnam War and Its Impact - American veterans 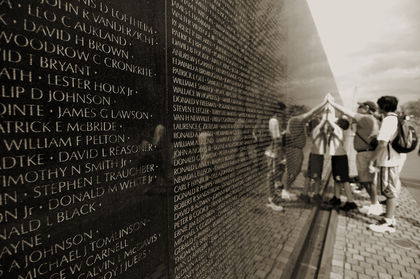 The Vietnam conflict impacted veterans in a variety of ways. Most combat soldiers witnessed violence and lost friends to the horrors of war. The dedication of eight new names to the Vietnam War Memorial on 28 May 2001 brought the American death toll to 58,226, a number that will continue to rise as the classified casualties of the covert war in Laos and Cambodia continue to surface. Some American veterans bore emotional and physical injuries that they would carry for the rest of their lives. Most remained proud of their service and of the role of the United States in the conflict. During the war approximately twenty-seven million American men dealt with the draft; 11 percent of them served in some fashion in Vietnam. As a consequence of college deferments, most U.S. soldiers in Vietnam came from minority and working-class backgrounds. The average age of U.S. soldiers in Vietnam, nineteen, was three years lower than for American men during World War II and Korea.

In contrast to World War II, American soldiers in Vietnam served individualized tours of duty rather than remaining attached to their units throughout the war. This sometimes produced difficulties in adjusting to life back at home. A minority of soldiers in Vietnam also became drug addicts who continued their self-medication because of the difficulties of transitioning to a peacetime existence, the availability of drugs in the United States, and the lack of federal programs to help veterans cope with postwar life at home.

Whether or not they felt proud of their service or sustained war injuries, returning Vietnam veterans received a lukewarm welcome for their service. A vocal section of the public vented its frustration with racism, the federal government, and the war on the returning veterans. While most Americans viewed World War II as the "good war," a majority of the American public viewed the Vietnam conflict as a disaster. Only the POWs generated postwar sympathy for the suffering they endured.

Some veterans wrote about their war experiences to educate the nation as well as improve their own understanding of their participation in the conflict and the public reception they received. Ron Kovic, a disabled veteran who served two tours of duty in Vietnam with the marines, wrote Born on the Fourth of July (1976), which explained his participation in the war and the difficulties of coming home in a wheelchair to an angry and hostile American public. Oliver Stone transformed the book into a successful film in 1989. Stone, who served in Vietnam, also produced the film Platoon (1986).

Despite the myth of the chronically impaired Vietnam veteran, most vets married, found jobs, and successfully reintegrated into American society. Many became successful businessmen and politicians whose experiences in the war shaped subsequent U.S. policy toward Vietnam. They became the point men leading the nation to a complex but more hopeful phase of Vietnamese-American relations. Yet veterans like Senator Bob Kerrey continued to face the fallout from their actions in Vietnam, revealing that the American people were still unable to unburden themselves from the political context of the conflict. Reminiscent of many veterans who have come under fire for their participation in the war, Kerrey rationalized his participation in a firefight that left twelve women and children dead as a response to orders followed in a chaotic and unconventional military engagement.

Reflecting the changing mood of the American public toward both the war and the veterans, memorials and other commemorations of the Vietnam conflict began to surface in the mid-1980s. They revealed a national desire to "welcome home" vets who had not received domestic support when they most needed it—immediately after the war.