The Vietnam War and Its Impact - Nixon's peace with honor 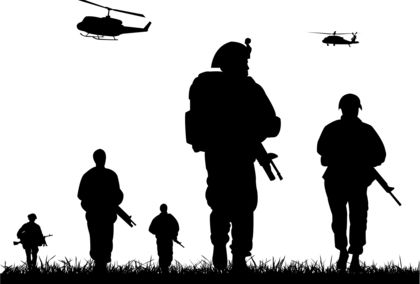 Prior to 5 May 1968, Nixon spoke of seeking a "victorious peace" in Vietnam. But on that day, speaking in New Hampshire, the nation's first primary state, he used the term "honorable peace" for the first time. Crucial to his plan was the concept of linkage—using the Soviet Union to get the North Vietnamese to negotiate seriously.

In what Nixon believed was an off-therecord discussion with southern delegates at the 1968 Republican Convention, the nominee described another way to end the war:

How do you bring a war to a conclusion? I'll tell you how Korea was ended. We got in there and had this messy war on our hands. Eisenhower let the word get out—let the word go out diplomatically to the Chinese and the North Koreans that we would not tolerate this continued round of attrition. And within a matter of months, they negotiated.

When Nixon took office in January 1969, the United States had been involved in combat operations in Vietnam for nearly four years. U.S. military forces totaled 536,040, the bulk of which were ground combat troops. More than 30,000 Americans had lost their lives to then and the war cost $30 billion in fiscal year 1969. In 1968 alone, more than 14,500 U.S. troops were killed.

Richard Nixon was determined that Vietnam would not ruin his presidency, as had been the case with Lyndon Johnson. The Nixon plan was to "de-Americanize" the war, an approach that became known as Vietnamization. It involved building up the South Vietnamese armed forces so that they could assume greater combat responsibility while simultaneously withdrawing U.S. combat troops. The U.S. military role would shift from fighting the DRV and VC to advising the South Vietnamese and sending in a massive influx of military equipment and weaponry. Perhaps most important, Nixon changed the political objective of U.S. intervention from guaranteeing a free and independent South Vietnam to creating the opportunity for South Vietnam to determine its own political future. Vietnamization along with negotiation were Nixon's twin pillars for achieving an honorable peace.

During the first weeks of his presidency, Nixon also began to consider options for dealing with Cambodia, including the feasibility and utility of a quarantine to block equipment and supplies coming from that nation into South Vietnam. Under code name MENU, B-52 strikes began on 18 March 1969 against enemy sanctuaries in that country. They were kept secret from the American public, in part because Cambodia was a neutral country, but even more important because Nixon had not been elected to expand the war after just three months in office.

Halfway through Nixon's first year in the White House, President Thieu requested that a meeting be held in Washington, D.C., but Nixon, fearful of demonstrations, selected Honolulu, which the Vietnamese rejected because they did not want to meet on a U.S. resort island. Nixon next suggested the remote island of Midway, where Nixon won Thieu's public acquiescence for Vietnamization. When Nixon proposed that secret or private contacts be started between Washington and Hanoi in an effort to secure a negotiated settlement, Thieu asked that he be kept fully informed on the details of these meetings and that he be consulted on any matters internal to South Vietnam. He received assurances that this would most certainly be the case. By January 1972 the United States had conceded on almost every major point, including, at least implicitly, that any cease-fire would be a cease-fire in place, which meant that North Vietnamese troops then in the South would stay there. What came next was predictable: The North Vietnamese could not get the United States to dispose of Thieu for them. They did not intend to stop fighting until they regained the South. Thus, they had one obvious strategy: stall the peace, pour forces into the South, and strike a deal only when a cease-fire in place virtually amounted to a "victory in place." In an announcement made on national television on 25 January 1972, President Nixon revealed that Henry Kissinger had been holding private talks with the North Vietnamese starting in August 1969 and that every reasonable American proposal to end the war had been turned down. Nixon offered the details of a secret proposal made on 11 October 1971 that called for internationally supervised free elections in which the communists would participate and before which President Thieu would resign.

On 30 March 1972, Easter Sunday, the North Vietnamese began their biggest attack of the Vietnam War. It was a conventional military assault, designed to inflict a crippling blow against the army of the Republic of Vietnam (ARVN) and would last six months. On 8 May, President Nixon met with the NSC and told of plans for mining Haiphong harbor and resuming the bombardment of Hanoi and Haiphong. He also told the council that he would inform the public of his decision in a televised speech that evening.

After the NSC meeting Nixon brought his cabinet together and stated frankly, "We've crossed the Rubicon." As Nixon would put it to Kissinger the next day, he wanted to "go for broke" and "go to the brink" to "destroy the enemy's warmaking capacity." He wanted to avoid the previous mistakes of "letting up" on the bombing that he and Johnson had made in the past. "I have the will in spades," he declared. Nixon was determined not to repeat LBJ's mistakes. "Those bastards are going to be bombed like they've never been bombed before," gloated Nixon. What followed, starting in May, was the most successful use of airpower during the Vietnam War and one of the largest aerial bombardments in world history—Operation Linebacker. Targeting roads, bridges, rail lines, troops, bases, and supply depots, the attack was the first large-scale use of precision-guided laser bombs in modern aerial warfare.

In the short term, the offensive was clearly a military defeat for the North Vietnamese and would cost General Vo Nguyen Giap his job as chief strategist. On the other hand, although Hanoi never retained control over a provincial capital, the North Vietnamese did gain ground along the Cambodian and Laotian borders and the area just south of the DMZ. Hanoi remained in control of this territory for the rest of the war, and in 1975 would use it to launch a successful attack on Saigon.

A week before the 1972 presidential election, Kissinger stated that "peace is at hand," but again the talks stalled and Nixon turned to "jugular diplomacy." Nixon decided that no treaty would be signed until after the November 1972 election, when his position would be strengthened by what most observers expected to be an overwhelming election victory over Democratic challenger and antiwar leader George McGovern. Reelected by just such a landslide, Nixon moved swiftly against North Vietnam.

On 13 December the peace talks broke down, and on the following day Nixon ordered that the bombing be resumed. Now his only goal was to bring Hanoi back to the bargaining table. On 18 December, Linebacker II—widely known as the Christmas bombing—began with B-52 bomber sorties and fighter-bomber sorties on the Hanoi-Haiphong area. The day prior to the start of the Christmas bombing, Nixon told Admiral Thomas Moorer, chairman of the Joint Chiefs of Staff, "I don't want any more of this crap about the fact that we couldn't hit this target or that one. This is your chance to use military power effectively to win this war, and if you don't, I'll consider you responsible." Admiral Moorer called for expanded air attacks with an objective of "maximum destruction of selected military targets in the vicinity of Hanoi/Haiphong." He ordered that B-52s carry maximum ordnance with preapproved restrikes of targets. Kissinger wrote later that "the North Vietnamese committed a cardinal error in dealing with Nixon, they cornered him." The B-52s were his last roll of the dice.

As in all wars of America's elective wars, don't look for right or wrong, just follow the money.
2
Dao Moua

North Vietnam and Laos broke the peace agreement, and why
no other countries especially United States did not punished
them. We all should respect international laws and agreements.

Which country broke the agreement that country deserves punishment. It my
opinion.